The car came to a stop throwing up dust on the dirt parking lot. It had been a 10-hour drive from San Diego and I could hear the complaining before the doors even opened.  Out of the hot car poured my young cousins: Matt, a typical hard-to-please 15-year-old; Charlie, a 10-year-old always buried in a book, and Katie, a 9-year-old who doesn’t leave the house without a fashionable change of clothes.

My aunt greeted me with, “I told you we wouldn’t like this!” I announced over the din, “Everyone take a deep breath and let’s get on the water.”

Before us stood Wahweap Marina and our 75-foot houseboat, replete with a ski boat, wave runners, two gas grills, state-of-the-art entertainment system, and even a hot tub.

In the distance, the shimmering waters of Lake Powell and the spectacular red cliffs of the National Park System’s Glen Canyon National Recreation Area called.

We hadn’t finished burying the anchors on a sandy beach in an idyllic inlet, before the grumbling was replaced with squeals of joy as the kids launched themselves into the lake via the houseboat’s water slide. These squeals continued uninterrupted from dawn to dusk for our entire stay.

I had long wanted to teach the kids how to fish, and the kids couldn’t wait.  I set them up with poles and hot dog bait before I fired-up the first round of margaritas for my adult family members.  They had to serve themselves though as hollering from the back of the boat signaled Charlie’s first fish ever.  I had barely finished Charlie’s official “First Fish” pic, when Katie complained about being “stuck on the bottom”. I knew better and told her to keep reeling. Her unbounded excitement of catching her first fish was only moderated by her concern that she might accidentally touch the fish.

While some adults enjoyed lounging around with a drink, the rest of us set-off with the ski boat to go tubing. The kids just couldn’t get enough! I got a good laugh from Katie though, who was afraid the fish she had caught and released earlier was down there seeking revenge.

Lake Powell sits at 3,650 feet and gave us enjoyable 90 degree weather during our visit in early July. Around midday, dark clouds would suddenly appear. Within a half hour cooling monsoon rains commenced.  This was a perfect chance to escape to my cabin for a nap.  Clear skies were signaled each day by squeals coming from the slide.

A couple of days into the trip, I was teaching teenager Matt to waterski.  Although he’s athletic, I was having a tough time getting him up.  I saw dark clouds in the distance, but Matt kept begging for another try.  I told him last chance before we had to race back to hide from lightning.  I was captaining and videoing at the same time and just as Matt got up, a lightening bolt struck less than a half mile behind him.  You are completely safe from lightning in a houseboat.  In fact, the boat is unlikely to get hit by lightning since it grounds the static electricity in the air near them.

We enjoyed a much needed break from the sun playing cards as it rained, while Matt repeatedly watched his ski and lightning video.

Lake Powell’s beautiful sunsets are a great time of day to relax on the top deck with the whole family. Adults enjoy a drink, kids soak in the hot tub, while I barbeque.  It’s this amazing ability for everyone to do what they want while still together that makes house boating great for families. The entertainment system was barely used, and, more amazing, the kids’ electronic games never saw the light of day the whole trip.

My uncle, adult cousin, and I were waterskiing when I spotted a 60-foot slip-and-slide set-up by a group of families’ house boating together.  We got invited and returned with our kids for a very fun afternoon making new friends.

We explored more of this giant lake everyday, but I was excited to show my family scenic Padre Bay and the big walled canyons farther upstream. This was a day-long adventure and the ski boat was completely filled. The kids enjoyed this scenery as much as the activities of the previous days.  And we had fun seeing how far we could go before a canyon dead-ended. Every turn it seems like you can go no farther. But, as you get to what seems like the end, a new passage of water is revealed extending into the distance.

Another great aspect of house boating are the special one-on-one opportunities with family. One of my favorites on this trip was taking Katie on a wave runner to explore the lake. It was just an hour or so of being away, but in the wide-open scenery at Lake Powell it seemed much more. It’s an experience we will both remember forever.

The biggest debate when booking our trip was how many days.  I suggested 7 days and my family recoiled at being “cooped up” together that long. I negotiated up to 5 days, and before we knew it, it was our last night. Everyone was in shock that the time had passed so fast.

Back on the docks, I convinced my aunt to go through Zion National Park on the way home. This didn’t stop the kids’ complaining though. Only now it’s, “When are we going house boating on Lake Powell again?!” 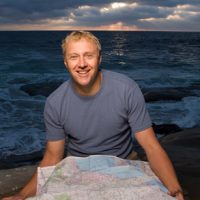 About the Author Jeffrey Lehmann

Jeffrey is host and producer of the “Weekend Explorer” travel series. At just 14, a visit with relatives became a summer long odyssey traveling Western Europe…alone! In high school, he participated in an exchange program to New Zealand, including exploring Australia and Hawaii. As a college student, intuition helped him escape the Tiananmen Square crackdown. Always the entrepreneur, as a junior at the University of California San Diego studying Engineering, he purchased and ran a mid-sized travel agency. Following college, Lehmann engineered new energy technologies for General Atomics by day, learned TV production at night—launching the award winning “Weekend Explorer” series in 1999 and earning an Emmy for “Performance as Host” in 2000 and educational series in 2009. “Weekend Explorer” is provided free airing on more than 210 PBS stations nationwide and airs on commercial stations across the nation. The series also airs in more than two-dozen foreign countries and in-flight on Delta Airlines.
Website Twitter