10, 9, 8, 7…. As blast-off for family vacation gets closer, you may want to think “out of this world.” Space travel, to earth orbit and beyond, is opening a whole new chapter of commercial tourism

At the Kennedy Space Center, you can touch a small piece of the moon not far from a looming Saturn Five rocket, then test your G-force mettle on a launch-simulating ride that cost $70 million to build.Space travel, to earth orbit and beyond, is opening a whole new chapter of commercial tourism, but the price tag to experience Zero-G usually includes lots of zeros. For memorable thrills at a lower fare, you can enjoy some cosmic experiences here on earth.

You can touch a moon rock or meteorite, talk to an astronaut, strap into a simulator, peruse the remarkable vehicles that have been to space, or head out to New Mexico’s Space Port a home to some of the spaceships of the future. And whether you are a child or an adult, you can immerse yourself in Space Camp in Huntsville, Alabama.

The President of the Space Tourism Society, John Spencer, says earth-bound space travel is becoming increasingly popular. He cites that more than 8.6 million people visited the National Air and Space Museum in Washington, DC last year. Rides and attractions at Disney’s EPCOT Mission to Mars attracted 4.1 million. Three of the US Space Centers – the Kennedy Space Center in Florida, the Johnson Space Center in Texas, and the Space Camp in Alabama – entertained 1.9 million visitors curious about life beyond earth.

Good Lunacy – Touch and Be Touched

During the six Apollo space missions back in the 60s and 70s, 842 pounds of lunar geology were brought back to earth. Most of these celebrities of the rock world are under lock and key in special conditions in Texas, but some have been made available for earthlings to touch.

One of the great highlights of the Smithsonian’s Air and Space museum in Washington, DC, is a real piece of the moon literally at your fingertips, and not far from the Apollo 11 capsule that carried the first people to walk the lunar surface.

At the Kennedy Space Center, you can touch a small piece of the moon not far from a looming Saturn Five rocket, then test your G-force mettle on a launch-simulating ride that cost $70 million to build.

To put your paws on something much larger than a moon rock and from further away in our galaxy, head to the Rose Center for Earth and Space in New York, where the Willamette Meteorite now rests. Scientists think the 15-ton space rock may have journeyed to earth from an asteroid belt between Jupiter and Saturn more than 10,000 years ago.

Spencer says more than $300 million dollars will be spent in the next few years developing the three “retired” space shuttles that once orbited millions of miles around earth and helped build the International Space Station.

The shuttle Discovery holds the record for the most space trips (39) and gets kudos for launching the Hubble Telescope. Admission is free at the Steven F. Udar-Hazy Center in Virginia ().

The Endeavour, named by school children, is now settled at the California Science Center in Los Angeles. Space lovers visiting LA can also tour NASA’s Jet Propulsion Lab (JPL) () to learn about exploring other planets, then head to the Griffith Observatory to see stars that have been around a lot longer than Hollywood.

The last shuttle to fly in space, Atlantis, will open to the public June 29, 2014 as part of Florida’s Kennedy Space Center. For a peek at the first shuttle, head to the Hudson River in New York. The Enterprise (yes, it was named in honor of the Star Trek starship) never flew into space, but now sits on an aircraft carrier at the Intrepid Sea, Air & Space Museum. Temporarily closed due to Hurricane Sandy, it should be open again by July 10, 2014.

While shuttling from coast to coast for space-blasts from the pasts, you can land in the heartland to learn about Russian and American launches at the Cosmosphere in Kansas (). This Smithsonian-affiliated museum boasts the largest collection of Russian space artifacts outside of Moscow, as well as a diverse collection of American memorabilia, including spacecraft from the Mercury program (Liberty Bell 7), the Gemini program (Gemini 10), and the Apollo program (Apollo 13).

As the countdown to summer vacation begins, these are just some of the many ways your family’s mission for fun can include a flight plan for earth-based space travel.

Next post Circle the Wagons in the Badlands of Alberta, Canada 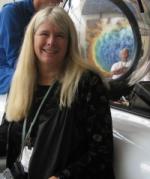 About the Author Lisa Sonne

NATJA Member Lisa Sonne has been covering Space Travel for over two decades including going weightless with cosmonauts over Star City in Russia on a LIFE magazine assignment, helping land a space shuttle with moonwalker John Young (in the astronaut’s simulator at Johnson Space Center,) getting Carl Sagan to sign a tile from the Space Shuttle and interviewing the latest host of COSMOS Neil deGrasse Tyson for an essay she wrote to accompany a special edition of Madeleine L’Engle’s classic Wrinkle in Time. Some of Sonne’s space writing is available on her website www.WorldTouristBureau.com under Space Travel.
Website