As France this year commemorates  the 70th anniversary of D-Day, the Allied Invasion of Normandy and the Liberation of France from German Occupation during WWII, Normandy is likely to move up a few notches on Dad’s and Grandpa’s bucket lists. But why let them have all the fun? Normandy is a destination with a surprising potential to please the entire family.

In the hundred-some visits that I’ve made to the Normandy Landing Zone since 1991, I’ve witnessed a notable shift toward family travel in the region. The zone offers family travelers the opportunity for moving, unifying and finally joyful experiences, especially for that most extraordinary form of family travel, three-generation travel. Each member of the family, from 9 to 90, is now able to find and make his or her mark in the sand where Allied troops landed on June 6, 1944, the beginning of the end of the Second World War.

A great array of museums, monuments, cemeteries, remnants, landscapes and seascapes—where European and North American heads of state will be gathering on June 6, 2014 to commemorate the 70th anniversary of D-Day—have the power to fascinate travelers of all ages and to lead them to appreciate and understand the battles, sacrifices, logistics and significance of the Invasion of Normandy 1944.

This isn’t a theme park; it’s the real deal, and that gives this corner of Europe an authenticity that prefab family destinations lack. The emotion, the drama and the sense of discovery and understanding are real and will be shared by every member of the family.

There are numerous angles from which to explore the war events themselves: with an eye towards paratroopers at Sainte-Mere-Eglise or Pegasus Bridge, with an interest in war materiel at the Omaha Beach Museum, with an emphasis on landing at a single beach at the Utah Beach Museum, with a hike up the hill from Omaha Beach to the American Cemetery, with a glimpse and understanding of the artificial harbor at the Arromanches D-Day Museum, with in-depth study at the museum of Caen’s Memorial Centre for History and Peace, with a view of a German gun battery in ruins at Pointe du Hoc or somewhat intact at Longues-sur-Mer, with a view of German bunkers at the Merville Battery, and so much more, all of which are accessible to children, teens and adults, whether war buffs or not. By car, by Jeep, by bike, by private tour, by long walks on the beach, the traveling family finds its own rhythm to visiting the area. Throughout you’ll discover one of the unplanned pleasures of visiting the Landing Zone: meeting people from all over Europe and North America who share a common interest in exploring our shared history.

Beyond the specific sights associated with what Gen. Dwight D. Eisenhower, Supreme Commander of the Allied Forces in Europe, called “a great and noble undertaking,” families traveling to Normandy this summer can attend celebrations throughout the former war zone as villages, towns and cities that honor the combatants and fete the liberation from the German occupation of 1940-1944 with a wide arrange of tributes, festivities, jazz concerts and ‘40s dances where visitors can party like it’s 1944. And even if you miss this summer’s 70th anniversary events, a trip to Normandy still promises to be a great, even noble, undertaking for traveling families or for two or three families traveling together.

Americans will often focus solely on the American D-Day sites of Utah Beach, Sainte-Mere-Eglise, Pointe du Hoc and the American Cemetery. Those are great and can fill two days of precious vacation time. Yet American visitors are well advised to make time for a glimpse of the British and Canadian beaches, museums and cemeteries, too, as well as the German cemetery, because each nation has a different approach to examining the war, honoring its dead and relating WWII to life today. The Juno Centre, the Canadian museum a step off the Juno Landing Beach, is notable in that it speaks not simply of the specifics of the Invasion of Normandy, as all of the others near the beaches do, but of Canada as a whole, of the 19th- and 20th-century immigration that preceded the war, and of the country’s entrance into war.

Some in your family will want to see more military equipment than do others, some will want to learn about logistics, others about personal stories, and still others about how the French lived through the German Occupation. But travelers needn’t spend their entire time in Normandy doing war touring. Family travel abroad involves balancing the divergent interests within the family. In the Landing Zone of Normandy that’s far easier than one would imagine. Even though the main thrust of tourism is the immediate area is war touring, family travel to Normandy, when properly planned, can include a wide variety of interests, both in the Landing Zone and on the way to or from. On the drive to or from Paris, for example, it’s an easy detour to visiting Monet’s House and Garden at Giverny, the stunning old port of Honfleur, the luxury resort of Deauville or the castle at Balleroy.

And there’s plenty to whet the appetite of the hungry traveler in a region also known for its agriculture, oyster farms and sea fishing. Indeed, the landscape of this part of Normandy is no longer defined by destruction but by cows, fields and apple orchards, while the fleet you’ll see is that coming and going from a fishing port. Travel in the region can therefore also include a hearty Norman dish from the land in Bayeux, a fresh meal from the sea at Port-en-Bessin, a visit to a Calvados (apple brandy) producer in the countryside, and a trip to a morning market to prepare a picnic for the beach, even if that picnic consists of nothing more than some good bread and a selection of Normandy’s famous cheeses (Camembert de Normandie, Livarot, Pont-l’Eveque and Neufchatel). And each member of the family will find his or her pleasure among a creperie’s selection of savory and sweet crepes, another staple of Norman cuisine.

Visiting the war sights of Normandy will remain a more likely item on Dad’s or Grandpa’s bucket list than on Mom’s, Grandma’s or the kids’, but it’s an item that all should take note of when looking for a special destination to bring the family together.

For a list of events for the 70th-anniversary commemorations in 2014 see http://www.le70e-normandie.fr/?lang=en.

Normandie Mémoire: http://www.normandiememoire.com/en. The site has a good introductory film to the Landing Zone and lots of helpful information about specific sights and events.

Calvados Tourist Board: http://www.calvados-tourisme.co.uk/en/. Normandy is divided into five administrative regions called departments (something like counties) and the Landing Zone lies within the department of Calvados except for Utah Beach/Saint Mere Eglise and surroundings, which are in the department of Manche.

Bayeux Tourist Office: http://bayeux-bessin-tourisme.com/en/. Bayeux is the most central town for visiting the D-Day Beaches if planning to say for just a night or two.

Memorial de Caen: http://normandy.memorial-caen.com/. This major war museum organizes daytrip excursion that include a visit to the museum. Worthwhile for those with an interest in spending the morning in the museum but less so for those who prefer to devote their limited time to the sites close to the beaches.

The author’s article about Norman cheese and other aspects of culinary travel in the Landing Zone:  http://francerevisited.com/2010/04/must-tastes-of-the-normandy-landing-zone-4-norman-cheeses/ 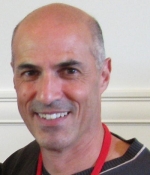 About the Author Gary Lee Kraut

Gary Lee Kraut is a Paris-based journalist, writer and editor. He is the author of five travel guides to France and Paris, including the critically acclaimed “Paris Revisited: The Guide for the Return Traveler.” He has also published numerous articles and essays concerning travel, culture, cross-culture, and expatriate life. He is the recipient of FrancePress’s 1995 Prix d’Excellence for his guide to France published in the Fielding Guidebook Collection. Since January 2009 he has served as editor and principle journalist for the premier web magazine France Revisited, exploring life in Paris and travels throughout France.
Website