A Telluride Destination Wedding During COVID-19

One of the most enjoyable things about my annual summer road trip, (which I call the “Retirement Doesn’t Suck Tour”), is seeking out events, like rodeos, that provide fabulous photo opportunities and great subjects to write about. During my three-month sojourn, traveling over 11,000 miles around the US this summer, I stumbled upon a special one, occurring over the July 4 weekend, in the town of “Leon” Iowa. This was a celebration of their 59th annual rodeo.

As I hadn’t contacted the organizers prior to driving there, I just showed up a day before the event hoping that my NATJA credentials could work some magic. Once I had arrived on the grounds, I hunted down the head honcho/committee chairman “Mark Smith”. I introduced myself, presented my media pass, and offered to write an article about their rodeo and provide his committee the use of my photographs in exchange for access to the event. To my pleasant surprise Mark loved the idea and he graciously offered me a parking spot in their staff-row for my trailer and even access to the shower block.  This was mid-west hospitality at its finest and a huge “thank you” goes to Mark and the committee for making this a great experience. I stayed there for four fun-filled days, soaking up the ambiance of the small-town rodeo and capturing some of its great images.

As I wandered the grounds before the opening ceremonies each night, scoping out the best photo locations, I soon noticed that I was probably the only adult male in the arena (and possibly all of Iowa) not wearing a long-sleeved shirt and a cowboy hat! Somehow, I always manage to stick out from the crowd.

Since it was the 4th of July weekend the arena stands were tightly packed and the “Red White and Blue” fluttered from pretty much everything that stood upright. Brisket smoke from the numerous blazing barbecues lazily wafted through the air while a constant flow of country music blared from loud speakers. I could almost taste the food sizzling all around me just by breathing in deeply. This was an “Americana” holiday weekend at its best, which was very good!

Each evening the rodeo began with a dozen or so young cowgirls demonstrating a fabulous performance of Synchronized Parade Riding followed by the announcement of the new Rodeo Queen. The crowd was then invited to stand for the National Anthem and join in a Prayer for the Athletes’ Safety.

Looking around at the sheer number of children in attendance it became apparent to me that rodeos are very much family affairs and I quickly learned why. The first events each evening were aimed specifically at children, notably, “Mutton Busting”, the “Critter Scramble”, the “Wild Pony event”, the “Calf scramble”, and the “Calf riding” events.

In the “Critter Scramble” children were invited into the arena to try to catch bunnies and chicks placed in the center of the arena. Parents were forewarned that there were no “give-backs.” If your kid caught it… it’s yours.

In the “Wild Pony” event teams of three children try to drag an untamed, obstinate pony across a line in the dirt.  One of them is pre-assigned to ride the pony across another line further down the arena and if they can do that quicker than the other teams, they win.

The last youth event is “Calf Riding” for the teens. The rules are much the same as for the adult version of the event.  Perhaps one of these promising young riders will be tomorrow’s champion.

“Barrel Racing” spotlights the cowgirls. Riders burst into the arena tripping a light beam to begin their timed run. They must then race a pattern around three barrels and sprint out of the arena tripping another light beam.  If they knock over a barrel it adds 5 seconds to their time and effectively eliminates any chance to win the event.

“Men’s Calf Roping” is a timed event where riders must give the calf a lead-time before bursting out of the box. They must then lasso the calf, jump off their horse, run over and flip the calf to the ground and then tie at least three of its legs, which must then remain tied for at least six seconds.

In “Women’s Calf Roping” the rules vary slightly from the men’s event. It’s still a timed event but they are not required to jump off and tie the legs of the calf.

“Saddle Bronc Riding” is the “classic” rodeo event and similar to bare back riding in the scoring. The main differences lay in the gearing of the horse and rider.  Both cowboys and cowgirls compete in this event.

“Steer Wrestling” is another timed event. The cowboy must burst from the gate and drop from his horse onto the running steer and then grab its horns and wrestle it onto its back with all four legs pointing upward. A second rider, known as a ‘Hazer’, participates by keeping the steer running in a straight line.

“Men’s Team Calf Roping” involves two riders; one must rope the calf’s neck and the other ropes both of its hind legs. Then both riders must face off to each other.  (I was stunned at the accuracy of the rider lassoing the calf’s hind legs).

I considered the “Bull Riding” event to be the premier photographic opportunity of the rodeo, not only because of their sheer size and weight, but also because of the ferocity of the beasts. As a photographer I often seek out unique positions to capture interesting images. This time I thought that being right behind the chute where the bulls burst forward would be an ideal spot! It was interesting … but terrifying!

At the end of the fourth night, after the last bull had flung off its unwelcome passenger, and the fans had filed out, and the lights were turned off for the final time, I actually felt a few melancholy pangs as I looked around the arena. While there are over 600 rodeos held in America each year, and some are iconic, like the massive week long “Calgary Stampede” in Alberta (which may have Hollywood actor Kevin Costner as its parade Marshall), and “Frontier Days” in Cheyenne, Wyoming (which may have country music superstars Brooks and Dunn performing center stage), no other rodeos can surpass the beautiful soul of a small-town rodeo like the one held in the heartland of America, Leon Iowa. 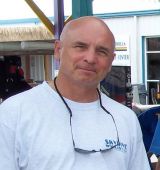 About the Author Steve Tambosso

In 1981-82 I studied film and fine art photography at Ryerson University in Toronto but left in my second year to pursue a lucrative business opportunity as the official publicity photographer for the Standardbred division of the Ontario Jockey Club. I was responsible for providing the numerous trade magazines and Toronto city newspapers with action photography of their harness racing operations. After leaving the track in 1985 I went to work as a staff photographer for the Mississauga News, a small community newspaper near Toronto but left in 1986 when I was hired on as a full-time firefighter. I had already begun skydiving in 1979 at the age of 19 and by 1986 I had developed the first wing strut mounted camera skydiving photography operation in Canada selling souvenir photographs to first jump student static line skydivers. That business operated for 28 years from 1986 until 2012. During that time I also personally logged over 6,500 skydives and a thousand or more of those jumps were as a tandem videographer/photographer providing first time tandem student skydivers with images of their jump. From 2006-2012 I also operated a successful hockey photography business selling action images of minor league tournament hockey games throughout Ontario to the parents of the players. Those two photographic operations were conducted concurrently with my 30.5 year career as a full time city firefighter. I retired from the fire service on January 31st, 2017 and my only interests now are in traveling the world photographing (and now also writing) about my travels as "The Wandering Fireman.
Website Facebook Linkedin