Paddling the Buffalo River in northern Arkansas is always exceptional. About the only way to top it is to paddle with Mike Mills, owner of the Buffalo Outdoor Center in Ponca, Ark., and quite possibly the person who knows the river best from a lifetime of experience.

When Mike Mills was about 8 years old, he started canoeing and camping with his dad. “Dad’s form of vacation was to take a canoe and a tent and go camp beside a river and fish,” he recalled. “That was the one week of the year I got to spend the most time with my dad.”

“We floated the Buffalo River for the first time in 1965, from Pruitt to Phillip’s Ford (now called Hasty). It was an 8-mile float and took most of the day. I remember stopping at the mouth of the Little Buffalo River and cooking fish in a cast-iron skillet over a fire. The Buffalo just had this draw that was unlike any other river. It was so beautiful; it was so pristine.”

Mills was hooked, and those trips with his father helped to define his career. Today Mills is not only doing what he dreamed of doing, but he is also sharing his passion for the Buffalo River with the thousands of people who pass through the area for floating, hiking, elk viewing, camping, fishing, bird-watching, and more. Mills was inducted into the Arkansas Tourism Hall of Fame for his lifelong devotion to the river and the outdoors.

Environmental awareness and conservation movements were sweeping across the country in the 1960s. In the early part of that decade, President John F. Kennedy endorsed the Ozark National Scenic Riverways (ONSR), the first national park to protect a wild, free-flowing river system. Congress in 1964 authorized the act, which protected 134 miles of the Current River and its tributary, the Jacks Fork River, in the Missouri Ozarks. The ONSR became the prototype for the National Wild and Scenic Rivers Act of 1968, which helped protect free-flowing rivers around the country. These two events paved the way for the creation of the Buffalo National River in Arkansas, the country’s first national river (not a river system, as with ONSR). The Buffalo was signed into law on March 1, 1972, one hundred years to the day after the establishment of Yellowstone, the country’s first national park. This year is the 50th anniversary of the Buffalo National River, which makes it a super time to get out and enjoy it.

The Buffalo National River protects 135 miles of the 151-mile river that flows from high in the Boston Mountains to its confluence with the White River, descending almost 2,000 feet along the way. Two Arkansas state parks – Buffalo Point and Lost Valley – were transferred to the park service to became part of the new national park. The historic Civilian Conservation Corps (CCC) cabins at Buffalo Point are especially popular with visitors.

The Buffalo is usually divided into three sections for recreation purposes — upper, middle and lower. Typically, the float season begins in spring with plenty of water to float the upper section on down. Spring rains produce whitewater rapids in the challenging upper section. As the season progresses and the river level drops, the floating options move downstream. Because the Buffalo is mostly rainfall dependent, it’s a good idea to check with local outfitters for current conditions in the section you want to float or fish. To avoid crowds, go on weekdays.

You might tend to think of the Buffalo as a summer destination, because floating and fishing are the primary activities. But the Buffalo is spectacular in the fall — as well as in winter and spring. Each season brings its own special beauty and outdoor activities. Canoeing, kayaking, fishing, hiking, camping, backpacking, horseback riding — you can do it all, year round. Hiking is exceptional, with more than 100 miles of maintained trails. Hiking is especially popular from November through March, when the ticks and snakes are not active.

The restored elk herd near Ponca is a big draw throughout the year, but especially in October and November in Boxley Valley and at the Elk Festival in Jasper in June. The Ponca Elk Education Center sponsors the Color Fest in Ponca each October (Oct. 21-22 this year). Be sure to allow time for a scenic drive on Highway 7, especially at the height of the fall foliage.

Arkansas is also the proud home of eight wild and scenic rivers, including a portion of the Buffalo River. Its upper 16 miles are part of the National Wild and Scenic Rivers System that’s managed by the U.S. Forest Service (USFS). This segment begins at the river’s headwaters in the Boston Mountains and flows through the Upper Buffalo Wilderness to the boundary of the Ozark National Forest.

From the forest boundary, the remaining 135 miles of the river, to its confluence with the White River, are managed by the National Park Service. The USFS upper portion is the river at its wildest and most primitive. The scenery is spectacular, with sharp and steep ridges and bluffs, large rock outcroppings, waterfalls, canyons, and caves. Hiking, backpacking, and camping are the most popular uses. The route to iconic Whitaker Point, also known as Hawksbill Crag, is the only designated hiking trail, but a system of old logging roads provides an informal network of trails for hiking and horseback riding.

This uppermost section of the river is definitely not for beginners. Even experienced whitewater boaters will find it a challenge. After spring rains, the swollen upper river is rated Class III-IV in difficulty, and it has an average drop of 38 feet per mile.

“A person needs a lot of whitewater experience,” said Mills, who has probably floated and hiked the upper section of the river as many times as anyone. “You have to be able to run blindly or follow someone who knows how. You have to be able to navigate and do a strong roll. If you’re a whitewater boater, it is great fun. If not, it can turn into a nightmare.” Because of the difficulty of this upper segment of the river, most visitors will opt to float the lower parts of the Buffalo. Be sure to consult an outfitter or a park ranger about weather conditions and the suggested section of the river to suit your abilities.

Barbara Gibbs Ostmann enjoys paddling the rivers in the Arkansas and Missouri Ozarks. Parts of this article appeared in AAA Southern Traveler in 2018.

Next post Heart of the Nation, an Iowa Rodeo 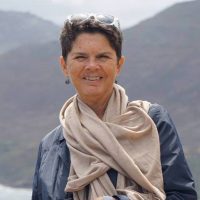 I've been a travel and food writer for decades, writing for newspapers, magazines, newsletters and online publications. I'm the co-author of 12 cookbooks as well as the award-winning The Recipe Writer's Handbook, a style guide. I have been a member of NATJA before, and after the Puerto Vallarta conference, my article, which appeared in AAA Midwest Traveler, won the grand prize and a return trip for me to PV.
Website Twitter Facebook Instagram