On any given day, there are over fifteen hundred vehicles eager to enter El Yunque National Forest in Northeastern Puerto Rico, but only two hundred parking spots. As one of the top attractions on the island, there was a push to reopen the park as quickly as possible after the devastation wrought by Hurricanes Irma and Maria in 2017. However, repairs are ongoing, and it may be years before all the trails reopen, and the number of parking spaces satisfies demand.

Because so many people want to visit these parklands, there’s been overcrowding, litter on trails, trampling of native vegetation, and reef-harming contamination of the surrounding ocean.

In response, the national forest instituted a reservation system. Still, much more can be done to promote sustainable tourism in Puerto Rico.

WHAT IS SUSTAINABLE TOURISM?

In Puerto Rico, that translates into making every effort to leave no trace outdoors, including minimizing the impact on popular attractions. Pick up garbage, wear reef-safe sunscreen, and consider natural resource alternatives to sensitive areas of El Yunque.

Timed entry tickets are required to enter La Mina Recreation Area (along Rd 191 starting near La Coca Falls.) But there are sections of El Yunque National Forest that do not require a reservation.

Brand-new and stunning, the El Portal de El Yunque Visitor Center opened in January 2022. This is an excellent place to learn about the only tropical rainforest in the U.S. National Forest System.

Set aside in the late 1800s, when Puerto Rico was under Spanish rule, the original sectors of the forest were a response to deforestation due to demand for ship-building hardwoods. But, of course, the forest’s history and name can be traced even further back to the indigenous Taíno, although accounts vary as to whether Yunque refers to deity or peak.

Not long after the U.S. invaded Puerto Rico, gaining the territory under the Treaty of Paris in 1899, conservation-minded Theodore Roosevelt became the 26th President. He is credited with establishing five national parks and 150 national forests, including the Luquillo Forest Preserve that came to be known as El Yunque.

One of the most interesting forest inhabitants–and most endangered–is the Puerto Rican Parrot. Daily ranger-led interpretive programs introduce visitors to parrots visiting from the aviaries where, thanks to ongoing conservation efforts, there are now 800, after being on the verge of extinction in 1973.

Discover a variety of educational exhibits inside the Portal, as well as labeled nature trails (including an accessible portion) surrounding the building.

A short and easy trail through colorful tropical foliage takes you from roadside parking to emerald pools along the Mameyes River. This has always been a popular spot with locals, and it’s not unusual to find a rope swing hanging from Tobonuco trees.

Avoid the daytime crowds on a Night Walk Tour with El Yunque Tours. Over sixty percent of the forest wildlife is nocturnal, producing the magical lights of fireflies and serenades from seventeen species of coqui tree frogs.

Some of the most popular attractions in the national forest are the impressive waterfalls, but La Isla Del Encanto is home to over five hundred falls, including sixty major ones. Discover Puerto Rico describes a few of the most beautiful waterfalls around the island. And we can recommend a couple more.

In Luquillo, and not far from El Yunque National Forest, you can find the waterfall pools of Las Pailas (as it’s spelled on Google Maps.) There are two main pools along the meandering waterfall, with lots of poolside rocks that make excellent picnic spots.

The main attraction here is the natural waterslides, with the larger one at the top pool and the smaller one below. However, be aware that these rocks are slippery and there are no lifeguards. Consider booking a tour as it can be a little challenging to find, and guides can show you the best way to tackle the waterslides.

Because easy access is through private land, expect to pay $5 for roadside parking. Note – there are no restrooms or amenities.

Gozalandia Falls used to be a secret spot, only accessible through cow pastures. But now, the double waterfall in San Sebastian (on the western side of Puerto Rico, near Rincon) has been developed to include restrooms and a restaurant.

Follow hiking trails past multiple little pools along the river connecting the two waterfalls. Both waterfalls offer large pools, although the 50-foot main waterfall features a cave under the streaming water where agile climbers can jump off rocks into the deep pool.

Meanwhile, at the second waterfall, a rope swing adds to the fun.

Attendants collect a $10 parking fee at the entrance, and patrols enforce safety rules, but there are no lifeguards.

Once again open to the public after extensive post-hurricane repairs, the Camuy Caves in northwestern Puerto Rico are impressive. Although you’ll typically enter through Cueva Clara, it’s part of a massive limestone cavern network extending from Camuy River, the third-largest underground river in the world.

A tour guide leads you through the caverns, explaining limestone formations and pointing out indigenous vegetation and native species such as the tailless whip scorpion spider – arachnophobes beware.

Short but splendid, the 1.5-mile Cabo Rojo Lighthouse Trail is located on the southwestern corner of Puerto Rico. It starts by the reddish salt flats and climbs up to the historic Los Morrillos Lighthouse. The view here is spectacular. Tall limestone cliffs and arches create a natural bridge over tourmaline waters.

Best of all, this trail ends near the serene crescent-shaped Playa Sucia, perfect for a quick dip or a beachside nap.

One of the most exciting ways to discover Puerto Rico’s subterranean features is on a Tanamá River Adventure. Explore ancient trails with Taíno guides who know the flora and fauna and can safely lead you on a thrilling tubing and even rappelling experience through the river caves. Look for Taíno petroglyphs and artifacts in the caves, hike through verdant rainforest, and observe a family-run farm harmoniously carved out of the land.

The Tanamá River is located at Utuado, in the central mountains of Puerto Rico.

There are only a few bioluminescent bays worldwide, three of which are in Puerto Rico. In the Caribbean, a species of phytoplankton called dinoflagellate Pyrodinium bahamese glows blue when agitated. However, it takes calm waters and dark night to observe the phenomenon.

The brightest of the bioluminescent bays, probably due to less light pollution and greater enforcement of natural resource management, can be found on the offshore island of Vieques. There are a handful of tour companies offering nightly kayak tours of Vieques’ Mosquito Bio Bay. Still, only Abe’s Snorkeling & Bio Bay Tours consistently gets the highest praise from locals.

Puerto Rico’s economy is highly dependent on tourism. As such, one of the best ways we can help the island recover from setbacks is to visit. Fortunately, Puerto Rico is one of the largest islands in the Caribbean, and it has been gifted with a grand variety of beautiful natural resources, in addition to its idyllic beaches. There’s no question that visitors have many opportunities to practice responsible eco-tourism. 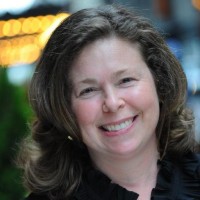 About the Author Sandra Foyt

Sandra Foyt is a storyteller, roadtripper, and award-winning photographer. She publishes travel guides on GetawayMavens.com, the romantic getaway experts. And her editorial photography is available on a variety of stock agencies, including Alamy, Adobe Stock, and Shutterstock.
Website Twitter Facebook Instagram Linkedin