When Covid-19 decided to take a round-the-world journey of a lifetime, it left the rest of us grounded indefinitely. Even with fewer hurdles to barrier-free movement within the country and abroad as we move into summer 2021, the American road trip will be the go-to adventure that gets most of us going again. Road warrior Laura Watilo Blake tests the water with an unforgettable family foray into South Dakota’s Custer State Park.

It takes two days and one federal interstate to drive from Cleveland to Mountain Standard Time Zone, where wide-open flatlands meet the rugged peaks of the wild West. As the mile markers along I-90 tick by, the scenery slowly morphs from verdant green and blue river valleys to suntanned ravines etched into the yellow plains. Then, dark green, the pine-covered slopes of the Black Hills rise like an island from the sea of waving yellow grasses and eventually the route reaches the purple mountain majesty of the Rockies that inspired the song “America the Beautiful” in 1893.

Itching to venture outside of our pandemic prison, and with no foreign travel scheduled for the first time in decades, our family is ready for a socially distant excursion into the great outdoors. The safest bet, in my mind, is an old-school American road trip like the ones I recall from my childhood. My six-year-old daughter, Kinley, is the same age that I was when my parents would load me and my three siblings into the back of our trusty red VW camper and head to the rooftop of America.

I remember seeing a million shooting stars zipping across the expansive Montana sky over Flathead Lake as I lay awake in the cot that was suspended in the camper’s pop top. I also recall clinging to my mother as Old Faithful shot a stream of water into the sky at Yellowstone National Park in Wyoming. I can still smell the pine needles that blanketed the edge of an alpine creek where we panned for gold downstream from an abandoned mine in Colorado. There were a lot of firsts on those family road trips.

I can only hope that my daughter’s memories will be filled with pleasant thoughts when she reflects back on our expedition along some of the country’s most scenic byways. But we’re not off to the best start in South Dakota’s massive 71,000-acre Custer State Park.

“We’re going to die!” Kinley announces dramatically when our car is eclipsed by a herd of bison along the 18-mile Wildlife Loop Road. The giant beasts are spread out over a grassy hillside and on the road, keeping a long ribbon of cars and RVs from moving in either direction — not that anyone except my daughter seems to mind. While both of us are squeezed through the opening in my car’s sunroof, we are transfixed by North America’s largest land mammals grunting and bellowing as they graze or wallow in the dirt.

It’s believed bison numbered between 30 and 60 million before outsiders reached the new world, but by the time the 20th century rolled around, these iconic animals —known as tatanka in Lakota language — were nearly extinct from overhunting by Euro-Americans settling the west. Only strong conservation efforts have been able to boost their numbers since.

The park’s herd, the second largest in the U.S., is kept between 1,350 and 1,450 head, based on the available rangeland forage. The excess animals are sold at auction following the Buffalo Roundup on the last Friday in September, which draws up to 14,000 spectators.

The rest of the year, a drive along the Wildlife Loop Road is the closest you’ll come to a safari in the United States. Stop into the Custer State Park Visitor Center, where a ranger can point out where the bison herd has been recently spotted along the route. While there are also prairie dogs, deer, antelope, elk, mountain goats and bighorn sheep wandering the park, they elude us on our visit.

There’s a lot more to Custer State Park than the wildlife, though. Our cozy cabin, located near the Sylvan Lake Lodge, comes with a panoramic view of towering boulders formed by cooling molten lava that has eroded over billions of years. It’s here Kinley develops a penchant for climbing rocks. She scrambles quickly to the top of a giant stone wedged into the earth next to a neighboring cabin. At the top, we can see a sliver of Sylvan Lake down below on the other side of a rocky barrier. The scenic lake was featured in the 2007 film National Treasure: Book of Secrets as its protagonists search for a hidden cave containing a mythical city of gold.

There’s no cave, but we spend time exploring the nooks and crannies of the Sunday Gulch Trail and skirt the edge of the lake where people are swimming, kayaking and fishing. The treasure is the tranquil ambiance, which is especially magical after the day-use crowds have gone. Only a few stragglers, including a fly fisherman visible in the water only from the waist up, remain as the sun sinks behind the rock towers bordering the lake.

We could easily spend a week in this underrated spot, which is often overlooked by visitors in favor of Badlands National Park and the nearby Mount Rushmore. We, too, paid a requisite visit to presidents Washington, Jefferson, Roosevelt, and Lincoln in the early next morning to avoid the crowds. However, we devoted more time to rambling along the spectacular 14-mile Needles Highway (SD-87), a National Scenic Byway that starts at Sylvan Lake. The route, which is punctuated with tight squeezes through rock-carved tunnels, gets its name from the sharp granite spires towering alongside the road. The most notable landmarks are the Needle’s Eye, which reaches 40 feet into the air with an oblong hole at the top, and the jagged peaks of the Cathedral Spires. Take the 1.6-mile out-and-back Cathedral Spires Trail to spend more time among the towering formations—a future rock climber’s dream.

Custer State Park charges an admission fee of $20 per vehicle that is valid for one week. Visit gfp.sd.gov/parks/detail/custer-state-park for more information.

There’s more to Yellowstone than steaming fumaroles, mud pots, hot springs, and geysers. On the east side of the park, take your binoculars to the Hayden Valley in the late afternoon or evening to help spot ample wildlife, such as bison, grizzly bears, black bears, wolves, and elk. Watch the Yellowstone River unleash its fury as it tumbles over the vertical wall of the park’s own Grand Canyon. And last but not least, take a detour along Firehole Canyon Drive to take a dip in the Firehole River, where pockets of stones have been piled up around a few warm spots. The only other place to swim is the Boiling River near Mammoth Springs and the north entrance to the park. The GyPSy Guide to Yellowstone National Park is an indispensable guide on your smartphone that doesn’t require a cell signal. It keeps track of where we are, lets us know about upcoming sights, gives us tips for viewing and tells stories. nps.gov/yell/index.htm

The Badlands gets its name from the Lakota people who called the region “mako sica” (“bad lands”). The otherworldly terrain is an ancient seabed that consists of a soft sedimentary rock eroding at a rate of one inch per year by the forces of wind and water. At this rapid pace, the Badlands will be gone in another 500,000 years. Because of the loose fragments of rock and sand and minimal vegetation, the landscape is difficult to navigate by foot. On the other hand, the 39-mile Badlands Loop Road (Highway 240) is the ideal place for a scenic drive among the picturesque cliffs and spires. Go early in the morning or around sunset to get a good look at the colorful layers of sediment, which correspond with different moments in geologic time starting with shale deposits from 75 million years ago. nps.gov/thingstodo/badl-loop-road.htm 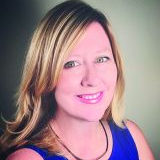