An Outstanding Adventure Without the “Bells And Whistles”

One of our most memorable family expedition cruises was in Myanmar (formerly Burma) with Pandaw Cruises along the Irrawaddy River. Planning to cruise with a 24 and 26 year old, my husband and I had some apprehension initially about whether they would find it boring, with no gala shows, limited internet, and no TV’s or pools as you would find on the bigger cruise lines. Our concerns dissipated as soon as we were welcomed across the makeshift gangplank aboard the 20 passenger Pandaw Kalaw, a teakwood replica of a 19th century British K-class river boat.

Immersing in the Culture of Magical Myanmar

As we cruised upstream from Mandalay, the crew used bamboo measuring poles to test the water level and ropes were thrown ashore when we arrived at each village or to overnight. All around the boat we could see children playing, women washing laundry on the jagged river rocks, villagers bathing and washing their hair, and a cacophony of animals like cows, dogs, goats and pigs ambling along the shore. With the river being the main transportation artery of the country, there were numerous fishing operations using large nets, the loading and unloading of bamboo and assorted building materials
on barges and the movement of fresh fruit and vegetables from diverse boats to wagons, carts and trucks waiting on the shore. As we travelled down the Irrawaddy on this small boat, we truly felt like we were immersed in traditional life.

Climbing to the top of a view of a pagoda provides a views of the Bagan steppe covered plain.

Magnificent sunset at the Shweddagon in Yangon.

Children gather to receive stickers in every village along the river.

Along the river we were also able to visit many landmarks of past Burmese dynasties and Buddhist sanctuaries including those in Bagan (our last stop) with over 3,000 stupas and pagodas dating back to AD 1086. Climbing to the top of the Shwe San Daw stupa, one of the few monuments travellers are still allowed to ascend, we had a 360-degree view of the “other-worldly” pagoda-studded terrain. Transported by tuk-tuk, ox cart, horse carriage and small buses we visited small towns and villages, each with its own unique character. In Pakokku we saw markets where tobacco, cotton, peanuts, textiles and thanatkha (traditional make-up and suntan lotion) are made and traded. In Yandabo, a village well-known for its terracotta pottery production, we tried our hand
at making a pot with the village elders cajoling us on. We also had an opportunity to visit a medical clinic and primary schools that are supported by Pandaw Cruises.

As far as I’m concerned nothing provides a better learning experience than an expedition cruise in remote Myanmar. Interesting daily lectures coupled with traditional puppet shows and musical performances, and the high level of interaction with the crew and other well-travelled guests without the distraction of TVs and the internet 24/7, offers a wonderful opportunity to immerse in the culture, history, and wildlife of magical Myanmar. 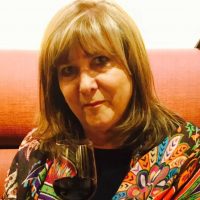 About the Author Judi Cohen

Judi Cohen has travelled the world in search of unique experiences and off-the-beaten-path destinations. She is a connoisseur of small-ship cruises that pack big adventure, and local cultural and dining experiences. Judi became a full-time traveler and travel advisor in 2015 following her 35-year career in engineering and transportation, and today she writes about her experiences to inspire others to step outside their comfort zones and embrace new kinds of adventures. Judi has been to over 80 countries on six continents and enjoys sharing her stories along the way. Her training and experience as a Health Coach and Travel Advisor allows her to seek out wellness destinations and design travel experiences. Traveling with family and friends, and sharing ideas and itineraries so others can plan their own unique adventures is her passion. Her “next trip” is always on her mind and on her calendar.
Website Instagram