Spirit of the Holidays at The Broadmoor

The air hangs heavy and wet as the 12-seat Cessna descends from the clouds. The rainstorm that had jostled us for the hour-long flight from San José, the capital of Costa Rica, had finally ended, and as I step out onto the single-lane dirt runway cut in the dense foliage, the damp, earthy scent of the rainforest is overpowering.

My guide Geovanny quickly whisks me past the small open-air shelter that serves as the port city of Golfito’s single air terminal to a small colorful panga waiting at the nearby dock. I’m headed into the heart of the Osa Peninsula, a corner of land on the southwest edge of Costa Rica along the Panama border.

As the boat slices through the warm blue-green waters of the Golfo Dulce (Sweet Gulf), it is not hard to understand why this region is widely recognized as one of the richest biological zones in the world.

Jagged mountains covered with thick, lush forests—so dense that no speck of earth shows beneath them—rise from the waters. At their edges, the trees are alive with hundreds of pelicans, a few of which take turns flying overhead. A row of Scarlet Macaws soars above the canopy, while in the gulf, a pod of bottle-nosed dolphins frolics in the distance.

A tiny country—smaller than West Virginia and with a population of about 4.5 million people—Costa Rica covers only about 0.03 percent of the Earth’s surface. But it plays host to almost 6 percent of the world’s total species—with more than half of that biodiversity concentrated in the Osa Peninsula. The region is home to between 4,000 and 5,000 species of plants, more than 120 species of mammals and upwards of 400 species of birds. And no visitor to the peninsula will leave without seeing more than a few of the region’s thousands of exotic and bizarre insect species.

A local resident Toucan in the Osa Peninsula – Photo by: Rebecca L. Rhoades

One reason for the area’s biological preeminence is the amount of precipitation that falls here—as much as 20 feet annually. It’s almost perpetually humid and soggy, and I am reminded of this as I reach my destination: Playa Nicuesa Rainforest Lodge, a private preserve nestled in the forests of Piedras Blancas National Park.

“You can’t leave stuff sitting around for more than a day here,” says Marie, manager of the lodge, as she rearranges the books in the main building. “It’s always so damp here that if you leave items in one place for a couple days, life starts growing under them.”

And as if on cue, the skies darken, and a violent storm rains down on us.

Dawn breaks, and I am awakened by the deep bellows of howler monkeys. I open the slatted doors of my cabin and enter a fantasy world where ferns and palm fronds grow taller than I do. Waves crash upon the black sand beach on the other side of a thick row of plants, while a cacophony of bird calls echo through the trees.

Before breakfast, I set out on a nature hike with Tomas, an older gentleman who moves stealthily through the brush in a pair of well-worn beige Crocs; the only noise comes from his machete clearing a path through the undergrowth. As the early morning light filters through the trees, Tomas skillfully tracks herds of peccaries, capuchin monkeys and a rarely seen tayra, a member of the weasel family. Tomas speaks little English, and my Spanish is pretty much limited to hola, adiós and gracias, but by using a stack of well-worn and laminated identification sheets, he takes great pride in pointing out numerous types of trees, animals and even the fresh tracks of an ocelot.

Tomas is considered a guardian of these forests, and for good reason. He was born under a mango tree on this exact plot of land. His family harvested cacao pods here until the 1970s when a fungus wiped out most of the country’s chocolate crop. Like many who once lived and hunted in these forests, Tomas now owes his livelihood to the country’s commitment to ecotourism.

For many, Costa Rica is synonymous with ecotourism and sustainable travel.

The country’s green era began in 1970 when, following nearly 50 years of unrestricted logging, a systematic effort was begun to save what was left of the wilderness. That year, lawmakers founded a national park system; today, 32 national parks cover approximately a quarter of the country. In 1987, Costa Rica’s natural beauty was thrust onto the world stage when President Oscar Arias Sánchez was awarded the Nobel Peace Prize for his efforts to end civil war in several Central American countries. (Costa Rica was the first country ever to constitutionally abolish its army, in 1949.) Soon visitors began pouring into Costa Rica, and tourism quickly became the country’s top revenue-producing industry, surpassing traditional commodities such as coffee, bananas and fishing.

In 1997, Costa Rica pioneered another initiative in green tourism: the Certification for Sustainable Tourism (CST) program. This green seal of approval is voluntary, but with the growing interest in sustainability, it is one that is becoming more and more popular with hotels and other tourist-related businesses.

A relative newcomer to the Costa Rican tourism industry, Playa Nicuesa opened in 2003. In 2009, it received a Four Leaf designation, and in 2012, it received the Five Leaf Award, the highest rating for sustainability.

There’s a popular saying in Costa Rica, “pura vida,” or the pure life, used to describe everyday life. Nowhere does the pure life seem more evident than here amongst the pristine wild of the rainforest.

Days can be spent hiking through the forest—a number of refreshing waterfalls can be found miles from the lodge for those who are willing and able to make the effort—testing your flexibility at one of the lodge’s daily yoga classes, or kayaking through the mangroves.(Several caimans and a resident crocodile live in the waters, so nighttime activities are strictly land-based.)

But travelers wishing to “go green” in Costa Rica don’t have to spend all of their time in athletic pursuits. Even the softest adventurer can have a satisfying eco-experience here.

A morning boat ride takes me to the Osa Wildlife Sanctuary. Within minutes of landing, a gentle spider monkey hops on my shoulder and begins playing with my hair and stroking my face, her long tail wrapping softly around my neck.

The 700-acre property, originally an avian sanctuary, provides care to injured and displaced animals of all species, thanks to the arrival in 2003 of spider monkey Poppy. The $25 entrance fee is used to help feed and care for the animals, most of which are released back into the wild. Crews and her staff also work to educate locals about conservation and animal care, even providing free spay and neuter clinics in the towns surrounding Piedras Blancas.

Sweetie launches herself into the trees and follows us as we tour a series of enclosures holding macaws, a tayra, ocelots, parrots, a kinkajou, and a very vocal troop of white-faced capuchin monkeys. Two sloths lounge in a hammock, their long toes curling over its edge. As we make our way back to the beach, Sweetie jumps down and runs ahead. She stops and looks back at us for a second before hopping on a wooden swing and tilting her face to the sun.

Relaxing in the main lodge while storm passes – Photo by: Rebecca L. Rhoades

Our new friend, “Sweetie,” checks us out – Photo by: Rebecca L. Rhoades

That night, the rainforest once again lives up to its name. Having just finished with dinner, fresh mackerel I had caught just a few hours earlier, I relax on a hammock on the second floor of Playa Nicuesa’s 2,800-square-foot main lodge. As I wait for the storm to pass, I enjoy a local Imperial beer and chat with Jonathan, the bartender. Soft-spoken with a kind smile, he is young, barely 20, but his love of the region’s natural wonders is obvious.

“I come from the city, but I love it here,” he says. “I go to school to learn about nature. I want to live here and teach others.”

Later, Jonathan and I head out for a short stroll around the grounds. He is quick to locate frogs that my untrained eye overlooks, including ones no bigger than my pinky nail. A red-eyed tree frog, the best-known symbol of Costa Rica’s rainforest and its preservation, sits on the underside of a giant leaf. Patiently it allows me to take its photograph before closing its eyes and disappearing into the darkness. 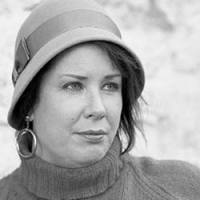 About the Author Rebecca Rhoades

Rebecca is a writer, photographer, and editor. Her travel journalism career didn’t begin until a trip to Greenwich, England, to celebrate the Millennium when she was bit hard by the travel bug. It was her first international trip, and since then, she’s traveled to more than a dozen countries on four continents, and just as many states, from Hawaii to Massachusetts. Rebecca writes for publications such as AAA World, TravelWorld International, and Global Writes. She was the recipient of a Gold and Bronze Prizes in the 2013 NATJA Awards Competition.