Amsterdammers love to claim there’s no translation for gezellig (pronounced heh-SELL-ick)—a Dutch word that describes a cozy ambiance and feeling of being comfortable with friends and loved ones.

Yet gezellig is defined in 3D every winter, when Holland’s capital turns into a wonderland brimming with holiday spirit.

At the first sign of fall, pop-up stands offering sugary olliebollen appear on Leidseplein, Rembrandtplein and Museumplein, as well as at Schiphol Airport and other high-traffic spots throughout Amsterdam. Follow your nose to these repositories of sphere-shaped sweets―precursors of the American donut―wafting aromas of apple and cinnamon.

In rare years when temperatures dip low enough for long enough, Amsterdam’s canals turn into frozen waterways, inspiring Dutchies to come out in droves to skate, as classical music infuses the chill air.

The winter holidays are in full swing by mid-November, when Sinterklaas steams into Central Station on his boat, with his Zwarte Pieten (Black Petes) onboard. After switching to a white horse, he parades through Amsterdam with his helpers, who distribute candy and spiced pepernoten cookies to expectant children.

Based on the Christian St. Nicholas (patron saint of Amsterdam), Sinterklaas cuts a statuesque figure with his snow-white beard, scarlet bishop’s robe and pastoral staff. Unlike the more rotund North American Santa at the North Pole, he resides in sunny Spain, where his annual steamboat journey to Holland begins.

Abundant folklore, as well as allegations of political incorrectness and racial stereotyping, surround the inspiration for America’s Santa. With their blackface makeup and Renaissance costumes, Sinterklaas’ lively helpers resemble 17th century slaves, antagonizing some celebrants. That doesn’t stop the fanfare in the weeks leading up to his name day, December 5, when little Dutchies leave carrots in their shoes, hoping Sint and his merry band will replace them with chocolate letters and other presents. Traditionally, parents and older siblings read the sarcastic poems they’ve composed, poking fun at each other. Naughty children are hauled back to Spain for a warm winter.

At the National Monument in Dam Square, some 40,000 LED fairy lights on a towering Christmas tree are switched on in December, complementing the illuminated facade of De Bejinkorf, flagship store of a high-end chain of Dutch department stores. Even De Wallen—Amsterdam’s most infamous Red Light District—boasts holiday lights in colors other than red during the year-end holidays.

Windows and lamp posts get seasonal treatment in Dam Square and on shopping streets like Kalverstraat, Leidsestraat, Haarlemerstraat, the Nine Streets, and posh P.C. Hoofstraat. The second annual Wintermarkt Amsterdam returns to Damrak and Beursplein, bringing crafts and edibles to the street running from Central Station to Dam Square. Westergasfabriek hosts both Sinterklaas Market on the last Sunday in November and the Funky Xmas Market in mid-December, showcasing the work of local artists, designers and other creatives.

In mid-December, the new De Hallen complex will welcome the holiday season with a festive version of its Local Goods Market in its industrial-style halls. Organic produce and sustainable gifts are specialties at the Pure Winter Market in Amstelpark and Park Frankendael. Just outside Amsterdam, Keukenhof Castle in Lisse hosts one of the Netherlands’ most magical Christmas events.

“Amsterdam’s holiday season has become a time that defines gezellig in a way everyone can understand.”

Let There Be Light

For more than 50 days, the Amsterdam Light Festival illuminates winter darkness with sparkling light sculptures and projections by Dutch and international artists. Set around historic landmarks, the installations can be viewed via canal boat or on a walking route through city center.

On Christmas and New Year’s Eve, visitors can enjoy holiday concerts at churches throughout Amsterdam. Services at Sint Nicolaaskerk feature Gregorian music; those at De Bejinorf include seasonal hymns sung by a choir. Our Lord in the Attic, a tiny church perched atop a canal house in Amsterdam’s Red Light District, offers Christmas Mass. For a more upscale evening, Amsterdam’s renowned Concertgebouw presents a Christmas concert featuring the Netherlands Philharmonic Orchestra.

Holland’s religious make-up is diverse, so many restaurants and cafés are open on Christmas Eve and Christmas Day, as well as St. Stephen’s Day on December 26, which continues the merriment with family and friends. The holiday season concludes with parties and fireworks throughout Amsterdam, including an official city display. Wherever you are on New Year’s Eve, you can’t miss some explosive fun.

Why Visit in Winter?

Save for holiday dates in December, air fares and tourist numbers are at their lowest in winter. The Rijksmuseum, Van Gogh Museum, Ann Frank House and other popular attractions are open, but with smaller crowds and shorter lines, making for a more intimate experience. Shoppers will find considerably emptier stores than in the U.S. during the year-end holidays, as well as specialty markets with holiday gifts.

While Americans celebrate 12 days of Christmas, the holiday season lasts three months in Holland. Despite cold, wet, rainy days—or maybe because of them—Amsterdam’s holiday season has become a time that defines gezellig in a way everyone can understand.

Next post Kirtland, Ohio is a small town with a large reputation 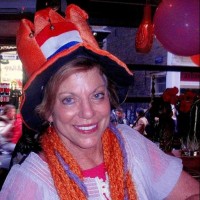 About the Author Melissa Adams

Melissa Adams is an American expat and freelance journalist who traded sunny Southern California for a soggy patch on the European continent. As AFAR's Local Expert/Amsterdam, she wrote The AFAR Guide to Amsterdam and regularly shares her passion for the Dutch capital at UnClogged in Amsterdam: An American Expat Plumbs Holland (www.uncloggedblog.com).
Website