The Village at Mammoth Lakes

By now the procedure had become routine: walk across floor pads containing a pool of disinfectant, hold our arms out to have our temperature scanned, and then hold out our hands for a squirt of hand sanitizer. Masked up and purified, we could now go shopping—keeping our distance from others, of course.

San Miguel de Allende often shows up in glossy travel magazines as one of the “best cities in the world” and is probably the most popular non-beach tourist destination in Mexico. A thriving art center and UNESCO World Heritage city, it’s a destination that had a lot to lose when the COVID-19 lockdown began. After four months of trying to survive with no visitors, the city government and business owners desperately wanted to open back up again. They knew they couldn’t do it with confidence, however, unless they put strict procedures in place to keep the virus from spreading.

The way San Miguel de Allende has adjusted to the challenge is a good model for how popular destinations can welcome back both the skittish and the careless by creating a framework built on caution and safety. The seriousness of both their communications and their actions has gone a long way to appease those trying to make a living and provide jobs, while still putting visitors’ health concerns at the forefront.

While there may still be aspects to quibble about, especially for the paranoid, for the most part they are getting it right. The environment I saw in this destination was a massive improvement over what exists in so many other parts of the USA and Mexico. I live just down the road in Guanajuato City, in the same Mexican state, but it felt ten times safer being in San Miguel de Allende. In my city, enforcement of mask-wearing is non-existent and businesses do not have to follow any certification program to stay open. The mayor’s administration goes through the motions, but you can tell their heart really isn’t in it.

“We just got permission to open the spa back up,” said Maggie at Hotel Matilda, one of the first properties to reopen after passing a long checklist of requirements. “We still aren’t allowed to open the bar, so we built an open-air one by the pool so people can sit outside and have a drink.”

Adaptation has solved some problems around the city, along with more personnel and hand sanitizing stations. This central Mexican city is blessed with a highland climate at around 6,000 feet as well, which gives it a unique advantage for outdoor dining and drinking. There are restaurants on rooftops and in open courtyards all over San Miguel de Allende that are open all year. So in a week of dining and drinking, we only ate indoors once. The only person who came near us was the masked waiter. Inside or out, dining and drinking establishments have capacity controls, with roughly every other table blocked off.

The San Miguel de Allende mayor made sure everyone got the message that masks would be required at all times in the historic center. On opening weekend, when several domestic tourists refused to put on a mask, they got tossed in jail and had to pay a fine. The action was meant to send a message and it worked: we saw very few people without face coverings on the streets or in stores in almost a week walking around San Miguel. With police stationed on the streets leading into the center, there’s at least a threat of trouble for those not following the rules.

We arrived in the city by rental car, and even then we were checked on the highway in. We rolled down our windows, stuck out our arms, and had our temperature taken before we even got to where we were going. Once there, every waiter, front desk clerk, and bellhop was masked up and maintaining the proper distance, whenever possible.

Admittedly, there are some aspects of all this that seem a bit overblown. The city’s largest park is closed in a destination where it’s hard to get walking exercise without dodging cars. When we visited six stores in one afternoon—getting squirted with hand sanitizer every time—we developed a thick film on our hands that stuck around until we could wash them properly. The disinfectant pads in every doorway and the misting stations (spraying who knows what) seem like props more than scientific solutions. Still, I’d rather have a bit of extra security theater than have lax leadership not broadcasting a consistent message.

“This almost feels normal again,” was a common refrain when we ordered a cocktail at rooftop bars, when we had breakfast in the courtyard of Hotel Amparo, or went shopping in the open-air artisan market. Everything was just a little off though. Many restaurants now print QR codes on the table so the menu is on your own phone instead of something physical to hand out. The Rosewood Hotel made me wash my hands before entering the rooftop restaurant and reminded me to put my mask on when I got up from my seat to take a photo. I usually have no trouble finding a shoeshine man in this city, but since most of the plaza spaces have been blocked off, these solopreneurs are shut out of their normal business locations.

Until we have access to a virus treatment or vaccine, this is probably the new normal of tourism. We have already seen what happens when destinations let their guard down and open up without enforcing mask wearing and distancing. Cases spike, hospitals fill up again, and deaths rise. If places want to welcome back tourists without killing them, we’re going to need strong leadership on the destination side and a few sacrifices on the traveler side.

San Miguel de Allende’s closest airports are Leon/Guanajuato (BJX) and Queretaro (QRO), both served by U.S. flights on major carriers. For ideas on what to do in and around the city, see the official San Miguel de Allende Tourism site in English: visitsanmiguel.travel 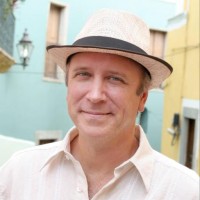 About the Author Tim Leffel