The appetite for excitement, interesting marine life, and unusual photo opportunities has greatly intensified within the scuba industry. Adventuresome dive travelers eagerly seek out remote, exotic destinations world-wide. Many American scuba enthusiasts have begun looking for interesting and exciting dive destinations closer to home, which offer beautiful vertical walls, interesting marine life, and the feeling of remoteness away from crowds of divers.

I decided to renew my focus on the Sea of Cortez. In the summer months, two live-aboard yachts explore the Northern Sea of Cortez, specifically travelling to a group of islets, rocks and pinnacles called the Midriff Islands. The Rocio Del Mar and the Quino El Guardian, embark from Puerto Penasco, at the northern edge of the Sea of Cortez. Guests fly into Phoenix, Arizona where they board a shuttle for a four-and-a-half-hour drive to Puerto Penasco at Rocky Point in Mexico.

The Sea of Cortez is a breathtaking destination for scuba diving and snorkeling. The water temperatures vary from the mid-seventies to the low eighties, and thermoclines are not unusual. Doing three to four dives a day, most divers opt for the warmth provided by a 5 mil-wetsuit. Visibility is highly variable and water conditions vary greatly with occasional strong currents sometimes appearing unexpectantly.

The Quino El Guardian, a converted fishing boat, offers four quad cabins and a double cabin located on the lower deck. The professional and friendly crew and excellent meals made up for the unpretentious accommodations.  As with most dive yachts, inflatable pangas ferry divers to the dive sites.

As a photographer, I was looking for subjects that would piqué my interest, and I wasn’t disappointed. There is a fabulous array of macro subjects, including blennies, jawfish and nudibranchs.

Our first dives were at Angel Island, where we discovered many macro subjects,  sea lion colonies and lush vertical walls. Midsummer is the peak breeding season for a number of resident fishes. During our first few dives, I was mesmerized by the behavior and antics of the bottom dwelling fishes that we encountered. We discovered Fine-spotted Jawfish, watching us closely from their burrows. These jawfish have a disproportionately large head and lots of personality. As with many jawfish, the male exhibits the unusual behavior of incubating eggs in its mouth.

As I focused on a Giant Jawfish, I noted flashes of color on the periphery of my vision that was the courtship display of a field of Blue-Spotted Jawfish. These smaller Jawfish are native to the Sea of Cortez and are usually found in large colonies. They are also mouth brooders, with the males incubating eggs.

In the same areas are pikeblennies and signal blennies, which mostly go unnoticed until mating season. The male Orange Throat Pikeblenny also has a very unusual mating display, assuming an s-shape posture and flashing a massive orange throat. Another interesting fish is the diminutive Gulf signal blenny. The male extends outward from its den and flashes dorsal fins.

San Pedro Mártir Island, is a small uninhabited island located in the center of the Sea of Cortez. In the late 19th and early 20th century, bird guano was heavily mined off the island and shipped as far as Europe for use as fertilizer. A large population of sea lions inhabits the island. Visitors are greeted by young sea lions circling closely, barking and blowing bubbles, until a large male decides to break up the frivolity. The big males, easily recognizable by their massive size and large bump on their heads, can be very protective of their harems.

The last full day of an itinerary is usually devoted to snorkeling in the Bahia De Los Angeles, a large bay with a resident population of young whale sharks, drawn by the large amounts of krill. This has generated a new industry for the local fishermen, who had struggled with making a living because of the effects of overfishing in the surrounding unprotected areas. On boats that were once used for fishing, locals now host snorkeling trips, offering tourists close-up encounters with the whale sharks intent on feeding at the surface.

As the live-aboard heads back to port, divers have plenty of time to pack up their gear and recount the numerous adventures and eagerly discuss new future voyages. 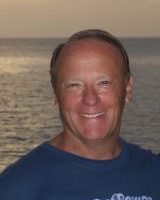 About the Author Steve Rosenberg

Steve Rosenberg began diving in the early 1970s and quickly became enamored with the beauty and excitement to be found beneath the surface of the ocean. He began his career in 1980 as a professional underwater photographer and photojournalist. Since that time he has produced over 20 destination print guidebooks for international publishers including Lonely Planet, Cruising Guides and Aqua Quest Publications; and 5 coffee table books, including one for Wakatobi Dive Resort in Indonesia. He has written hundreds of articles for various U.S. and International publications. In the late 1980s Steve put together and operated a retail Scuba Diving trade show named SEAVIEWS, in Oakland, California. Under his direction, Seaviews quickly became one of the largest and most successful scuba shows in the United States and drew over 10,000 divers annually for over 10 years. Thousands of his images have appeared in books and magazines worldwide, and he has also won more than 250 awards for his imagery in international competitions, including gold medals in the prestigious Hans Hass Photo Competition in Austria and the First World UW Photography Competition held in the Turks and Caicos Islands in 1997. Most recently, he won a gold and bronze medal in the Nature Category of the Moscow International Foto Awards competition in 2018. In 1996 Steve received the coveted Scuba Schools International SSI Platinum Pro 5000 certification, awarded to divers with 5000 or more dives. Today he has roughly 7,800 dives, most of which with camera in hand. He is an active member of the Society of American Travel Writers SATW and the North American Travel Journalists Association NATJA. In 2013, Steve assembled a new team of professionals for the purpose of producing interactive eBooks to be used as scuba and travel guides, as well as powerful marketing tools for destinations, resorts and live-aboard operations. The team includes Coral Consulting, owned by Greg Bassett. To date, this company, Rosenberg Ebooks, has published Six comprehensive dive and travel guides, including the award winning guides, Dive and Travel Grand Cayman, Dive and Travel the Bay Islands of Honduras and Dive and Travel Galapagos. He is currently working on Dive and Travel Turks and Caicos Islands.
Website Twitter Facebook Instagram Linkedin