For more than 800 years, Innsbruck, has been the hub of the area known as Tirol, the most mountainous province of Austria.

Innsbruck, Austria began as a Roman outpost in the 4th century. It was long referred to as Oeni Pontum, named for the bridge over the river Inn, where it became one of the main settlements along a waterway that starts as a trickle at the western end of the spectacular Engadin Valley of Switzerland and flows all the way to the Danube. For more than 800 years Innsbruck has been the hub of the area known as Tirol (also spelled Tyrol), the most mountainous province of Austria. It is bordered by Germany to the north (Munich is closer than Vienna), Italy to the south (the famed Brenner Pass is 30 kilometers away), and Switzerland to the west, just beyond Austria’s Vorarlberg Bundesland. Today Innsbruck is a bustling place having an estimated 150,000 permanent residents, 30,000 students, and probably ten times as many visitors gathering there during its high seasons (summer and winter).

The city’s administrators and other community leaders have long striven to maintain its very special Tirolean character. This is most evident in the center, a living monument to past glories. Many restored or well-preserved Modernity and tradition in Innsbruck old buildings abound. Taken together they offer classic examples of Romanesque, Baroque and rococo churches and palaces and homes of noble families. Some of the latter are now hotels, and many others house shops and restaurants on lower floors with apartments above. The area is the favorite haunt of tourists, but it is also regularly visited by local residents who take special pride in the uniqueness of their town.

Innsbruck is probably best known to Americans as the home of two Winter Olympiads, 1964 and 1976. Europeans have long known it as a great place to ski and hike and most of the winter visitors come from nearby countries. Now a destination city, ski center, and stopping place for those on grand tours, people from all around the world are coming to know it as “the place with the Goldenes Dach [Golden Roof], the Hofburg [Imperial Palace] and Triumphpforte [Triumphal Arch] — and the contemporary art and jewelry of Swarovski.

With its cultural and commercial and recreational attractions, to locals and long-time residents, Innsbruck is something more: a religious and political center where church and state were long conjoined as these two institutions ruled over body and soul. While the population remains predominantly Catholic and “native,” in recent years the city has become much more diverse. Many shopkeepers told us that this has contributed to a more cosmopolitan, less provincial feeling even as they, too, spoke of the very specialness of “our” Innsbruck.

I had been to the area to ski some years ago but never really spent much time exploring the city or learning about its history. An invitation to visit Innsbruck in the early autumn prompted a most worthwhile return. This time Hedy was with me and together we found ourselves both intrigued and enchanted by what we learned, saw, and experienced in one memorable and very busy week in the Tirol.

As we wandered the main thoroughfares and side streets, we found an amazing mixture of tradition and modernity, with several neighborhoods that are quite similar in architectural style to that of the center, and some very modern ones, with buildings of steel and glass. One of the latter is the Hotel Adler where we stayed. It is a 14 storied tower that is a five-minute walk from the main railroad station and a ten-minute walk to the oldest part of town. In addition to its convenience are the spectacular views from almost all rooms, and from every part of the top floor where breakfasts are served.

The first day we were in Innsbruck we met with a professional tour guide, Elisabeth Grassmayr. When Hedy asked her to describe her city, without a moment’s hesitation she said, “I live in a place where every day is a holiday.” She then continued, “Look around. There are mountains within a few kilometers of the city, huge churches, royal palaces, and the home of two winter Olympics and an Olympiad for youth in 2012….” We were to learn that she spoke with a very special kind of insider-authority.

In addition to her day job, Elisabeth is a life-long skier, hiker and entrepreneur and a true Tirolean in every sense of the word. Many years ago she married into a family that had already been making church bells in Innsbruck for fourteen generations. Not surprisingly, she made sure that one of the many stops we made during the two days spent under her guidance was at the Grassmayr Foundry, founded in 1599. There we were told and shown how bells were made – from tiny ones for Christmas tree ornaments to the largest bell in the world recently cast for a gigantic new cathedral in Bucharest, Romania. Another new creation was a special bell commemorating the life of the late Czech leader, Vaclav Havel, a personal hero of mine.

With Elisabeth and on our own we visited a number of churches including the Hofkirche [Court Church] with its tomb – although, curiously, not the body – of native son and icon, Emperor Maximilian; the Wilton Abbey Church and Basilica, and several small chapels; Die Tiroler Landsmuseum, with major collections of history and art; the Tiroler Volkskunstmuseum for folk art; concert halls conference centers, theaters and two royal residences: The Kaiserliche Hofburg and our favorite, the Schloss Ambras on the lower slopes of the mountain range on the southern side of town.

Elisabeth took us to see Das Tirol Panorama a fabulous 1000-meter circular painting of a famous battle when local fighters rallied against the forces of Napoleon in the early 19th century. The panoramic painting is very close to the Bergesil Ski Jump, now in its seventh iteration. It is the place of many winter-time competitions and used even in snowless months for practice on an artificial landing surface. At the very top is a prize-winning architectural landmark, a glass-enclosed restaurant that juts out from the tower that provides with great vistas of the whole area.

On a Friday evening we enjoyed joining thousands of local citizens –and surely as many tourists — in a revelry called “Innsbruck Night.” The stores in the Old City were open and the restaurants and bars were full and vibrant, but, to us, the highlight of the evening was the street entertainment. Most intriguing was an incredible troop of dancing mimes, half of them on stilts. They performed in the city square and then danced their way through the nearby streets. There were other performing groups, some clearly appealing to children, and a one-man band whose three-wheeled motorcycle carried an array of instruments — some played manually by the maestro, others clearly digitized. We stood through many sets listening to him and observing the enthusiastic reactions of his large audiences. When he finished playing, he swiveled around on his seat, revved the engine and tootled off to a typically Austrian martial tune.

One morning, still guided by Elisabeth, we decided to go to the ridge in the center of the nearest massif to a lift station visible from almost anyplace in town. We didn’t go on foot, as many do. Instead we took a very modern funicular railroad that starts in a tunnel at the center of town and ends high on a plateau above the city near to the first station of the Nordkettenbahnen, from where two cable car rides took us to the place we had observed from far below. The terminus is the beginning of hiking and biking trails and ski runs down the mountain. Like so many such venues in the Tirol, it, too, has the convenience of a restaurant where one can sit on the deck or inside, have a beer and a bowl of goulash or some Wurst before heading back down. And that is what we did.

Part of another day was spent on the opposite side of valley. A quick ride on a city bus took us to a stop just beyond the renowned ski village of Igls where we were able to take a cable car to a spot quite near the summit. En route it was easy to see the Olympic bobsled run that snakes below the lift line. We hiked from the last station to the summit enjoying spectacular views of the city below and the even higher mountains beyond.

On the recommendation of new friends in Innsbruck, we took a twenty-minute train ride to the town of Jenbach and then a bus from the railroad station to the resort area that surrounds the Achensee, a beautiful mountain lake. Many activities are offered in the area. Wanting to see more, we opted for a two-hour ride on one of the many ferryboats that ply the waters of the lake.

Back in Innsbruck, and before heading home, we decided to visit some of the many old shops and several 21st century huge shopping centers very close to them, the most elegant being the Tyrol Kaufhaus which is across the street from another new and modern gallery of many shops and several restaurants.

Shortly after leaving Innsbruck and getting back to the Sturm und Drang of the real world, we started reminiscing about our stay. Then I remembered an inscription we saw on the wall in the lobby of the Volkskunstmuseum. It expressed our sentiments precisely.

Innsbruck is accessible by train, car, or airplane. For maps, guides and other material, contact innsbruck.info. 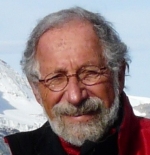 About the Author Peter I. Rose

Peter Rose is a sociologist, ethnographer, writer, photographer and editor. For 50 years he has been studying, writing and teaching about people on the move -- from colonists and immigrants to tourists and travelers -- and their encounters with others. Sophia Smith Professor Emeritus of Sociology and Anthropology and Senior Fellow of the Kahn Liberal Arts Institute at Smith College in Northampton, Massachusetts, a member of the Graduate Faculty of the University of Massachusetts and the faculty of the Salzburg Global Seminar in Austria, he has been a visiting professor at Clark University, Wesleyan, the University of Colorado, UCLA, Yale and Harvard; a visiting scholar at the Hebrew University in Jerusalem, Oxford University, the Chinese Academy of Social Sciences in Beijing, the East-West Center in Honoiulu, Stanford University, and at study centers in Bellagio and Bogliasco in Italy.
Website