Epic Skiing Without the Crowds in Idaho

The Luberon area of Provence is known for its hilltop towns, lavender fields and its colorful bounty--purple aubergine, scarlet tomatoes, and the orange-fleshed Cavaillon melon that is famous all over France.

View from the ochre-colored village of Roussillon. Photo by Jacqueline Swartz.

The Luberon area of Provence is known for its hilltop towns, lavender fields and its colorful bounty–purple aubergine, scarlet tomatoes, and the orange-fleshed Cavaillon melon that is famous all over France.

Sunshine and olive groves, almond trees and historic villages, preserved by the designation of the Luberon as a “regional natural park.” How could people not be influenced by this place?

My first encounter with a Luberon local is in downtown Cavaillon, the town that serves as the hub of the Luberon. Settling in with my coffee in bakery café called Maison Auzet, I am introduced to a robust, white-haired man. Gerard Auzet is a retired master baker, whose family owned the place for generations and who helped Peter Mayle (Toujours Provence) with his book called Confessions of a French Baker. I ask him about the state of bread in France today. He’s happy to expound on the subject, starting from after the war, when, spongy loaves were the norm, to today, when people want artisanal products. “We like the bread to be crusty and full of holes,” he explains.  It’s always a thrill to me when language – French – opens the door to conversation.

Hilltop lunch at the House of Truffles and wine. Photo by Jacqueline Swartz

Rolled chicken with truffles on poloenta, part of the truffle lunch at the House of Truffles and Wine. Photo by Jacqueline Swartz

Mushrooms of Provence. Every season has its bounty. Photo by Jacqueline Swartz

Gerard Auzet, master baker, with a loaf of the best bread. Photo by Jacqueline Swartz

Artist Jean-Claude Lorber in his atelier. The lessons begin here and then move outdoors. Photo by Jacqueline Swartz

I feel the same when I approach the formidable Madame Frederique Duran, who is seated at a table in the garden in front of her country home in the lowlands of Gordes. Now nearing her mid-90’s, she is known for a lifetime of art – sculpture, painting and stained glass. This year, 2016, there will be exhibits of her work in the nearby Chateau of Lourmarin and elsewhere. But many of her pieces reside permanently in the museum she built, devoted to stained glass art. It’s a lovely museum, and the Provencal sunlight only intensifies the blue and red colors of the glass.

Madame Duran bought the large property in the 1950’s, and it includes her home and a museum housing an ancient olive oil mill. Built by the Romans, it is reputed to be the best preserved olive oil mill in the world. Around the mill are large amphorae for containing the oil; in another room are oil lamps that Duran collected in the Middle East as far back as the l950’s. “People used to throw them into the garbage”, she notes. Madame Duran is proud of her museum and her art, but reluctant to talk about her past:  she is a decorated Resistance fighter who walked out of a Gestapo jail when Paris was liberated.  (“I was just lucky”, she says).

Cavaillon’s Michelin-starred restaurant, Prevot, is where I’m having dinner, and I have arranged  to meet the owner, local celebrity chef, Jean-Jacques Prevot, in his kitchen.  Fully in charge, he seems to dance around his busy staff, delighted; at the same time, he shows me what he is doing with smoked salmon, sautéing it with cepes (mushrooms), endive, garlic, and local paprika.  I can see why people are drawn to his cooking classes. It’s more fun to learn when a Michelin-starred chef is smiling.

In the dining room, he comes by my table sporting his signature Panama hat. Pointing to a long table on the other side of the room, where a group of doctors are dining, he says: “Years ago I would be trembling in my toque; now I am enjoying myself.”

In the town of Cavaillon, rising up in back of the tourist office, is the impressive St. Jacques Hill, which is on the pilgrim’s walk to St. Jacques de Compostelle. Conveniently, the tourist office will book dozens of tours – hikes, mountain biking, even a via ferrate (Iron handles, ropes and other aids used in climbing mountains). There are guides for every taste, from painting to bird watching and flora spotting.

Strolling the narrow streets of Roussillon. Photo by Jacqueline Swartz

Stone walkway in Gordes, names one of the most beautiful villages in France. Photo by Jacqueline Swartz

Stone arch in the “perched” village of Gordes. Photo by Jacqueline Swartz

My own climb is up the stone steps of the hilltop of village of Roussillon, known for its exquisite ochre-colored buildings. Ochre? I thought it referred to a mustard yellow color. But the buildings in Roussillon, set in the largest ochre quarry in the world, display colors of rose and red, highlighted by the intense sunlight.

To learn about the pigment, I visit the Conservatoire des Ocres de la Coleur. Formerly a factory, the building is now dedicated to preserving the region’s ochre heritage. My tour could have gone on for hours, so fervent was the guide about his subject. I learn that ochre comes from sand and clay, and ranges in color from burnt sienna to deep red to mustard yellow. The oldest cave painters used ochre, and fine arts painters used it before synthetics were invented. Outside, I follow paths past streams and the sand that yields the pigment. Inside there’s a shop selling ochre paints and books ranging from fine arts to home decor. Really serious ochre students can take classes on the art and science of color ranging from three hours to three days. For serious immersion (and cheap lodgings), some stay in simple rooms at the Conservatoire.

Lavender is not only a defining color of Provence but a signature scent. The season of dreamy fields is short: mid-June to mid-August. Yet September is such a great month for a visit to Provence – there’s a drop in both the number of tourists and the temperature. My solution: visit the Lavender Museum. It is run by the Lincele family, which has been growing lavender in Provence for five generations and has collected items like copper sills dating  from the 17th century.  I learn that lavender has been used in medicine and cosmetics for over 400 years.  The best plants, Fine Lavender, have an Appellation d’Origine Protegee (AOC). You can actually ingest it. The other kinds are spike lavender and a hybrid of these called lavendine. The boutique, of course, has every kind of lavender potion anyone could want.  Another thing to love about the Luberon.

Next post Generational Travel: A Different Type of Travel 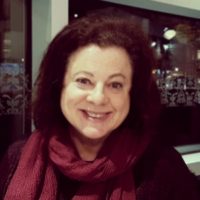 About the Author Jacqueline Swartz

Jacqueline Swartz grew up in San Francisco, lived in Greece and Paris and now resides in Toronto. She has traveled to no-go places in Northern India, interviewed philosophers in Paris and sent political dispatches from Athens. Her work appears in major Canadian publications, and she has written for Cosmopolitan in the US and Conde Nast Traveler in the UK and Agence-France Presse. Travel writing encompasses her interests and passions, from food to art, from health to archeology. When it comes to social media, she is still finding her way.
Website Twitter Instagram