And lately, it’s all about the food

Having spent most of my life in New York, I always had a feeling I’d love Baltimore for its inherent character, waterfront location, distinct personality and beautiful old architecture. But with my college years spent in Boston, cousins and friends in Philly, pizza and plays in New Haven and vacations that brought me near Providence and Portland, I’d never actually been there. So when my son decided on a college just outside Baltimore, I looked forward to getting to know this city I’d theoretically loved. And four years later, when he contemplated moving elsewhere, I was already mourning my lost connection. Turns out he loves living there as much as I love visiting. He stayed, making Federal Hill his home — and a regular destination for us.

Distinct neighborhoods, each with its very own thing

Federal Hill is charming with street after street of pretty little brick row houses. At night, they glow from inside like tiny gems. Close to the Inner Harbor and below a beautiful park, the area has cobblestone streets, gaslights and blocks of businesses serving the twenty and thirty something crowd who make up most of the residents. Hangout spots that feed their desires for big breakfasts, Ravens watching, casual dining and serious drinking. Many houses here have roof decks, so walking the streets at night, you often hear good music and good times coming from high above the sidewalk. Canton has wide streets, more beautiful row houses, neighborhood-y restaurants and a population of young families and young professionals. Fells Point is right on the water with busy bars and atmospheric pubs like Duda’s Tavern and Thames Street Oyster House. (It also had Michael Phelps before he got tired of people gawking up at his all-glass, harborside apartment.) Mount Vernon is elegant — the cultural hub with The Walters Museum and inspired strolling alongside impressive cathedrals, monuments and mansions. Hampden, a bit outside the city proper, has a friendly, welcoming atmosphere with endless blocks of small shops (last count: 169) offering handmade jewelry, hip housewares, vintage clothing, antique furniture, artwork, contemporary clothes and of course, good food.

From the moment I had my first crab cake at Faidley’s, a retro seafood spot right off the somewhat grungy Lexington Market, I knew they could cook things in this town that just couldn’t be done a few short hours away in New York. While the crab cakes are uniquely delicious just about anywhere in town — from college bars and corner joints to the better restaurants in the city — the baseball shaped beauties from Faidley’s deserve their constant #1 status. With no noticeable filler and a faint tang of mustard, they’re tender and superb. Crab cakes aside, the well-deserved distinction from Zagat’s has given the city’s dining scene an upgrade in national status, bringing attention to some of its local stars.

In a spectacular old foundry, Woodberry Kitchen has been called the Chez Panisse of the east coast. Its combination of elegant industrial chic, an enthusiastic and knowledgeable staff, house made everything (from pop tarts at brunch to the marinated cherry in your Manhattan), their take on local seafood and everything else I’ve ever had there, it’s a restaurant that should be on every food lover’s list. In May, Spike Gjerde, Woodberry’s chef and the genius behind it all became Baltimore’s first James Beard award winner. Recently, in a former automotive garage, Gjerde opened Parts & Labor, a butchery and now popular dining spot. His Artifact Coffee in another reclaimed industrial space is also sublime. Warm and den-like, I had my first Maple Latte there, along with a griddled English muffin with an egg and cheddar cheese — a far cry from the ordinary deli standard. On our last trip, after discovering Artifact, we ended up there every morning but Spike Gjerde’s places are like that. For years, I would only eat at Woodberry Kitchen for the same reason. When something seems as good as it gets, why go elsewhere?

Down a flight of stairs or with sweeping harbor views, the new and the established have a lot to offer

But elsewhere I have gone lately to try the city’s ever expanding food opportunities. Sugarvale, a downstairs hole-in-the-wall in Mount Vernon serves house cured charcuterie and craft cocktails. La Cuchara is the place for innovative tapas, again in an impressive repurposed industrial location. Dooby’s is a great little spot for Korean food with modern leanings. And Ceremony Coffee Roasters is an aficionado’s paradise, featuring seminars and everything coffee at their “pro shop.”

The stalwart Charleston in the growing Harbor East area is elegant, hushed and lovely for a special occasion. Chef Cindy Wolf is a local luminary. Around the corner on Aliceanna Street, Azumi serves fabulously fresh sushi in a serene setting. The Brewer’s Art has long been preparing innovative farm-to-table food in a lovely old Mount Vernon townhouse, along with its many craft beers. The main floor dining area is always busy but the big crowd heads downstairs where beer flows thorough the night.

Hotels for every size wallet

Although Baltimore may not be widely known as a luxury destination, the high end is getting higher all the time. The Four Seasons, in the shopping and strolling hub of Harbor East, is as luxe and elegant as you’d expect. In soothing white, gold and beige tones, the rooms have spectacular harbor and city views. The spa is one of the more serene and relaxing spots I’ve visited and once there, I was sorry I couldn’t stay all day. Wit & Wisdom, the hotel’s restaurant by chef Michael Mina serves a copious brunch buffet I’m still dreaming about, especially the shrimp and grits. The newest luxury entry is The Ivy, a sublime addition to the Relais & Chateaux collection. In a Mount Vernon mansion, a stay is akin to being a guest invited into a home of eclectic elegance, from being personally greeted at the entrance to a cocktail bar and mini bar with no extra charge, no matter what you enjoy. The artwork, décor, guestrooms and public spaces are just gorgeous. The Ivy’s downstairs restaurant, Magdalena, is lively and welcoming. Elegant preparations befit the setting, especially the intimate wine cellar dining room. The colorful Hotel Indigo is around the corner from the spectacular Baltimore Basilica, known as America’s first cathedral. The Brexton is in a quirky old building overlooking a tiny alley street with some of the narrowest and most adorable houses I have ever seen. Online rates for both can be surprisingly low — and both put you in a beautiful part of Mount Vernon.

Guest living room at The Ivy

Luxurious bath at The Ivy Hotel

Magdalena at The Ivy Hotel

Champagne at The Ivy Hotel 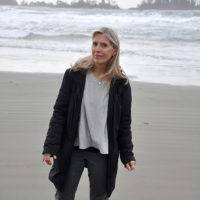 About the Author Leslie Long

Leslie Long is a NY-based freelance travel writer and photographer. She gravitates toward coastal areas, emerging areas, small cities and destinations that require multiple connections before arrival. A regular contributor to Westchester Magazine and Limite Magazine, she has also written for the NY Post, Dallas Morning News and Real Food Traveler.
Website