The Bountiful Culinary Options of Israel

It’s “where America’s day begins!” as they say. Morning begins first in Guam, which is 3,800 miles southwest of Hawaii. Guam is the largest island between Hawaii and the Philippines.

Family fun at the beach

Not only just natural beauty, there’s plenty of history. Even World War II sites are easy to find and visit, as well as scenery steeped in legends. There’s so much to do in Guam and discover. Tourism is the second biggest industry after the military. And there are definitely interesting locals to meet and interact with, as I found out.

It’s one of my favorite places, not just for the attractions but for the friendly people you meet and fun along the way. It’s really worth the trip. Arriving alone from a long but good flight sure didn’t stop me from a thrilling, as-you-go adventure each day and a rich cultural-filled vacation.

Hafa Adai! This welcoming “hello” greeting became so familiar that I happily started to say this, too, as I grew more and more enchanted with my Guam trip during my 12 days in this tropical, western-Pacific paradise where a beautiful blend of Spanish, Japanese and American cultures blend.

Who wouldn’t like this bright, sunny climate, the clean ocean waters and the beautiful green and open-village landscape atmosphere? It suited me perfectly. The native people, the Chamorros, made sure of that. I admired their hospitable nature and their attitude of being grateful for the beautiful island they call home. I loved how they wanted to show me their preserved sites, such as the Stone Latte Park.

I learned a lot about Guam’s customs and talented locals at the annual Guam Micronesian Island Fair, with food, crafts, music, native structures, dancing and a lot more, which will be held May 15-17, 2015.

While Guam has festivals of all kinds, it will host the 12th Festival of the Pacific Arts from May 22 to June 4, 2016. It will be the island’s big opportunity to showcase its Chamorro culture that has survived colonization of the past and modernization of the present. This premiere event is hosted every four years at a different Pacific island as a mission to preserve indigenous customs and traditions.

The first few days I was on Guam, I hardly used my rental car, spending my time enjoying the first of several beach resorts. But I wanted to learn more so I visited the Guam Visitors Bureau and picked up several brochures and got great hints on what to do from its friendly staff. One of their first suggestions was to snorkel at the beach behind their office. It was terrific suggestion.

The staff also said I should try diving since Guam is one of the more affordable places to scuba dive. One can go off the shore or from a boat. I did both with the Micronesian Divers Association. I hired my own diving instructor and we marveled at the good visibility in the perfect temperature waters.

For a living museum experience, I went to Gef Pago Chamorro Cultural Village, modeled after a typical Chamorro village where I saw skills from the old days demonstrated and was able to interact with the crafts persons. I learned the uses of coconut oil and saw how a rope is made. My imagination was swept into another time.

The following day, I was intrigued by a local enterprising Chamorro merchant casually chopping fresh coconuts from the back of his pickup truck. He said he was Joe, the Coconut Man. He had his truck perched at the site of Fort Santa Agueda, a Spanish historic site built in the 1800s overlooking Hagatna. As I sipped the refreshing coconut water I was intrigued to watch Japanese visitors adding soy sauce and wasabi to the coconut meat.

One of the special treats I enjoyed is when a new friend took me to the home of her family to eat with her relatives. We dined on typical Chamorro specialties, such as red rice, cucumber salad and chicken kelaguen, a popular dish using lemon juice, salt, grated coconut and hot red peppers.

She also took me to her church fiesta and parade. Catholicism is the principal religion with the first Catholic church being built 1669. Church festivals and fiestas are open to the public and visitors can find them listed in the Pacific Daily News.

Guam also is full of nightlife for all ages. My friend took me to the Chamorro Village Wednesday Night Market, where we had so much fun eating some good local food and seeing all the local crafts that I couldn’t resist. We also went to the Sandcastle Showroom for a Las Vegas-styled performance. I also enjoyed the Trades Jazz Club, featuring excellent musicians.

He’s based on a steep bluff at the last of four Spanish fortifications built in 1810 on the south side of the island at the village of Umatac. “I introduce local culture. It’s what visitors want to see when they come, not malls or a concrete jungle. This is a different tourist who comes to the south of Guam,” he said. “I like to take my shirt off — it makes me look more native. The carabao is up here for pictures and riding. Any donation will do. You do or you don’t. It’s part of the hospitality and tradition on the south part of the island.”

Another interesting twist on Guam are the legends around some of the scenic sights. Two Lovers Leap cliff is a favorite of picture-takers and features the most magnificent view. According to ancient folklore, at this breathtaking site two ill-fated lovers forbidden to marry tied their hair together, then leapt to their deaths from this 378-foot high cliff.

Sirena the Mermaid is another legend. You can locate a statue dedicated to her beneath the San Antonio Bridge in Hagatna. The legend is she disobeyed her mother by choosing to swim instead of running errands and was cursed. But before she was completely changed into a fish, her godmother intervened. Legend says that Sirena swam out to sea. My friend named her daughter Sirena. “She thinks it’s so cool that she was named after Guam’s legend.”

The War in the Pacific National Historic Park is interesting to visit. You can learn about many of the events of the Pacific War, including the Battle of Guam and the role of the Mariana Islands in helping to end the war. The park was established in 1978 to honor all those who participated in the Pacific Theater, including those from the United States, Japan, and the Allied nations.

Comprising of 1,000 acres, the park hosts thousands of visitors each year. The National Park Service maintains seven sites around the island. I took time in the little theater to watch an educational film on the Pacific War that I found so compelling I ended up purchasing it in the gift shop. Information is available at the T. Stell Newman Visitor Center near the U.S. Naval Base Guam entrance on Marine Corps Drive. You may also contact the park at (671)333-4050 or visit www.nps.gov.

Hopping in my rental car, I took my own solo around-the-island day tours, stopping whenever and wherever I felt like it. I really recommend this circling the island for a sense of accomplishment and its joie de vivre experiences. It can be tricky driving around, navigating the roads and learning where things are, but it is well worth the effort and things begin to look familiar after a few days.

I stopped at one historical church where I discovered a few parishioners playing the piano and singing. I joined in and sang songs with them! We snapped some photos together, and I felt so glad to have this connection.

Relaxing in the Inarajan Pools, a natural system of swimming holes by the side of the road, is another special place during my drive and was a favorite stop because it was easy to park and get in the pool. It was also fun to chat with others while enjoying the free soaking and sunshine.

Jeff’s Pirates Cove is a well-known hangout and one of the original beach bars. It has   a great view fronting the Pacific Ocean. There’s plenty to eat and do. It’s also a nice spot to buy postcards and kitschy souvenirs. I got lucky and met Jeff who started it all, still running a Seaside Museum here with ancient Guam pieces and World War II artifacts.

Spas are also part of most of the larger hotels on Guam. At the Outrigger Guam Resort, I enjoyed not only the water activities at the pools and beach but also the Mandara Spa massage and steam area. I also made friends with a few visitors from Japan and we giggled as we snapped pictures of each other. When our Global Media Gathering (I was a U.S. delegate) ended and my stay at the Outrigger was over, I moved to the Hotel Santa Fe, a laid-back hotel on a bay with a little beach. It was great having breakfast or dinner outside facing the little island to which you can swim or kayak and relax to no end.

I’m glad I went to Guam. It’s close to my heart now, even though it’s thousands of miles away. I love the people, the way they draw you in and captivate you and share their island and its ways, its foods and activities. Everyone I met seemed interested in my happiness and was wishing me a good time.

I want to return, maybe to the Festival of the Pacific Arts to see all the island delegations that will come to Guam. All travelers should consider Guam sometime in their travel plans, since the rest of the world and the American military and their families and friends have already discovered this great place. 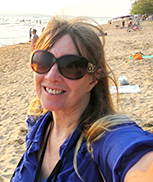 About the Author Carla Marie Rupp

Carla Marie Rupp is a world-traveling freelance journalist based in New York City. From the Midwest, she earned a degree from the University of Kansas in journalism and an M.A. degree from the City College of New York.