Discover everything you ever wanted to know about films here!

After years in the making, the Academy of Motion Pictures has achieved the longtime dream of the movie industry of completing a 300,000 square-foot Museum Complex. While Los Angeles is already popular with tourism, this museum undoubtedly is destined to become a world-renowned tourist destination! An architectural masterpiece, it was designed by Pritzker Prize-winning architect Renzo Piano and is a must-see attraction that promises to be an exciting movie experience for all who enter its portals.

A landmark Art Deco building with a golden metal exterior, it is located on historical Museum Row at Fairfax Avenue and Wilshire Blvd. and was chosen years ago to be the main Museum building.  Originally built in 1939, it was one of the popular May Company department stores. The highly recognizable Academy Museum today is comprised of two buildings, the Saban Building, and adjacent to it, the glass dome Sphere Building with the 1000-seat David Geffen Theatre and atop, the Dolby Family Terrace, a spectacular open setting for parties and performances.

Festivities at the dazzling Gala opened with a celebration of events provided by the Museum’s own Lights-Camera-Action and commenced with an open house Press Conference for world journalists. Next, there were Special Honorees, then Welcome Days for Charter Members, and finally, the anticipated VIP Opening Night Official Ribbon Cutting and Opening for everyone. Academy Museum Director and President, Bill Kramer, declared the Museum complex “an instant landmark for residents and visitors alike” in the world capital of filmmaking.

Arriving at the Academy Museum Gala, guests, honorees and superstars entered a palm-lined coconut grove on a green carpet and through a forested tree tunnel, an amazing exhibit by Japanese filmmaker and animator Hayao Miyazaki. The Gala, which was a Museum fundraiser, benefited film-making programs and education. Ethiopian filmmaker Haile Gerima and Italian superstar Sophia Loren were honored and special award recipients were Bob Iger, Annette Bening, and Tom Hanks, for their lengthy campaign leadership on behalf of the Museum. Champagne flowed and guests were treated to a Wolfgang Puck inspired dinner. Highlighting the evening, the one and only Lady Gaga, performed an array of jazz and classics, loved by all.

Entering the Grand Lobby, which is named for film legend Sir Sidney Poitier, I felt transformed and required a moment to marvel at the ingenious modern design and massive 10,000-square-foot space with 24-foot ceilings. Located at this level is Fanny’s Restaurant & Cafe, named for famed vaudeville, theater, and radio star Fanny Brice with the support of her granddaughter Wendy Stark. We are reminded that Barbra Streisand won an Oscar for her portrayal of Fanny Brice in Funny Girl (1968). Service for dining and cocktails is also at this level. And additionally, the new Museum Gift Store is a great place to collect cinema treasures, books, posters, logo clothing and so much more. The impressive “Founding Supporters Wall” also embellishes this level and if you look closely you can see my name. The “Stories of Cinema” exhibit begins here too, with hundreds of reel tidbits on multiple screens.

Moving upward to Level Two via the escalator, one instantly recalls “Bruce,” the shark from Jaws (1975). This fiberglass model, the last one from the original four models, weighs 1,208 and is 25-foot-long, and looms over visitors ascending and descending. In the “Stories of Cinema” area Oscars are a fascination and a room is devoted to Oscar winners through the years, showing their acceptance speeches on multiple screens. In the “Gold Room” there is a circular display of the coveted statuettes, each in a glass case, donated by the many recipients such as Clark Gable and Barry Jenkins. If you can’t get enough of the Oscars here, go for “The Oscar Experience,” (a separate ticket required), where you can get star treatment on stage while receiving an Oscar in front of a simulated cheering audience.

Here are a few more of the exceptional exhibits that can be enjoyed:

“The Wizard of Oz (1939) Gallery,” behind the scenes. This display includes the cast on the Yellow Brick Road, Judy Garland’s costumes, those dazzling Ruby Red Shoes – (the ones she wore to click her heels) with 2,300 sequins, designed by MGM’s own Adrian, plus sketches and other items from the film.

Director Spike Lee has a personal gallery immortalizing his career with film posters, handwritten scripts, and speeches (he does not type), inspirations of musicians and athletes, eccentric outfits, and more. Lee’s Oscars include Best Screenplay for BlackKkKlansman (2018) and Honorary Oscar (2016).

“Backdrop: An Invisible Art” displays the monumental matte painted backdrop of Mount Rushmore which dominates the room. Created for Alfred Hitchcock’s “North By Northwest” (1959), it is a realistic vision augmented by photos showing how it was used in the film.

The Path to Cinema, on Level Three, appeals to history buffs with inventions that contributed to film visuals from shadow boxes, to peep shows and magic lanterns.

Level Four is the inaugural exhibit of Japanese Oscar-winning director/animator Hayao Miyazaki, beloved for his many decades of big-eyed children, whimsical creatures, and animated cells. Enter via a magical tree tunnel to view his sketches and storyboards up close with movie clips on the walls in a recreation of his Ghibli Studio in Japan. There are 400 pieces of his collections in this special exhibit.

On this level Pixar Toy Story giant Zoetrope features characters from “Toy Story” (1995), placing them on a giant turning table bringing them to life.

The Academy Museum is the talk of the town. There is so much to see and absorb! It is truly a life-changing experience. Plan a journey here, marvel at the exhibits, and consider returning soon for screenings, lectures and happenings, and movies every day, all year round! With my passion for movies, and as a Founding Supporter, Charter Member, and Journalist, I participated in the early celebrations and can personally verify that the new Academy Museum is an instant joy and worth a visit. It’s a perfect place to spend holidays, and any day, with family and friends.

Next post Off the Beaten Path: Holiday Escapes in Puerto Rico 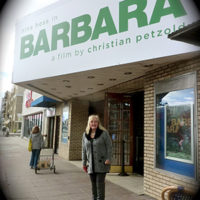 About the Author Barbara Singer

Barbara Singer is a seasoned travel and entertainment journalist based in Los Angeles and Santa Barbara. She has been a columnist for Beverly Hills Today, Passions International French Magazine, Boulevard Magazine, Discover Mexico, La Pinoy Filipino Magazine, Irish Arts & Entertainment, Real Travel Adventures.com and more. As an avid film buff, she screens 20 films monthly. She has been a press journalist at many film festivals including Cannes, Deauville, COLCOA, Santa Barbara, Ojai, Irish Film Festival, L.A. Film Festival and others. She is a member of Film Independent, Academy of Science Fiction film group, Australians in Film, IWOSC,past IFW & TWA and 15 years NATJA.