Chicago Christmas With The Grandkids

Live Oaks and Spanish moss shaded the Davises’ barn, which was in a small town of about 5,000 people in Central Florida surrounded by dairy farms and citrus groves. In this part of Florida, radio stations turned to noise—the occasional Mexican ballad cut through the static of some AM stations like a ghostly transmission. Nobody would visit Wauchula unless they had business there, like we did somehow every Thanksgiving after my father remarried.

I want to remember that my older brother Damian was also in town visiting for the holidays that first year I visited the Davises. Together, with my father and stepmother, we rolled up the dirt path to the barn, parked under an oak tree, and walked to the barn as acorns crunched underfoot. My brother and I were outsiders, but as soon as we walked into the barn, the Davis daughters—all three carefree, optimistic, and chatty in that southern kind of way—made us feel as if we were honorary Davises with nice-to-meet-you hugs and offerings of beer. More cars and trucks parked under the oak trees. Strangers hopped out and crunched their way to the barn where the Davises welcomed them with nice-to-see-you-again hugs and offerings of beer.

That’s all I remember about my first Thanksgiving with the Davises, but not for any other reason than because it is hard to distinguish between all the Thanksgiving Days when each one is also a Groundhog Day of acceptance, gratitude, and blue skies.

Every year, we would find ourselves at the gazebo where we’d happen on Brent in the same spot, stirring a vat of “swamp cabbage” and drinking a beer. Next to him, Joe Jr. would tend to the meat inside the smoker. The grandparents of the greater Davis clan often took up lawn chairs in the gazebo’s shade, Dutchie bringing with her a tray of deviled eggs to pass around the group.

“Remind me — you said you lived in Tallahassee, right?” Brent would ask as he hovered over his steaming cauldron.

“Yeah. You never know who’s going to win these games.”

“That quarterback you have. He’s something.”

As the conversation turned to football rivalries, Joe Jr. would ask us what kind of beer we’d like and passed around sausage slices.

A variation of this happened every year.

But amid the reliable comfort, uncertainty crept in. Joe Sr. was the first to go, followed by his wife Pat of 68 years. Dr. Elver Hodges, another honorary Davis, left us after turning 107. The Davis girls started moving away to bigger cities, getting married, and having families of their own. One year, only Savannah came down. Another, just Ashley. Another, none did. When the Davis girls did come home for Thanksgiving, they brought with them unfamiliar faces: love interests that turned into spouses that produced children. Soon, my little brother was born and, just like us, became an honorary Davis on Thanksgiving Day.

Yet, with all the comings and goings, the deviled eggs would continue to make their rounds as children ran off, hopped a barbed-wire fence, and threw twigs into a pond.

“Are there alligators in here?” a kid would ask each year.

“I haven’t seen any lately,” Gloria would say with a mischievous smile. “But there are fish.”

Sometimes, the cows and buffalo would walk to the fence and lick the hands of whoever was brave enough to stick one through the barbed wire. Parents would eventually call their children back for the meal, which always began with a prayer and ended with everybody cleaning up.

We will miss the Davises for Thanksgiving this year. Dutchie and the other elders of the group are too old to risk a covid-19 infection. The Davis girls probably won’t travel home. And my older brother, who probably wouldn’t have come home anyway, died in May. Yet, while time embellishes our memories, blends them together, and makes them hazy and distant, they live on. And they remind us that, though some will be with us and some will not, real and honorary Davises will descend upon Wauchula for Thanksgiving next year. 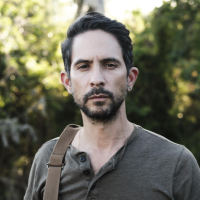 About the Author Jeremy Bassetti