Located along the St. Lawrence River in Canada, it became a haven for those looking for lower temperatures, spectacular landscapes and a warm local welcome.

Back in the days before air-conditioning, those with the means to do so would escape to cooler climes to avoid the oppressive heat and cholera-choked cities. The Charlevoix region of Quebec, located along the St. Lawrence River in Canada, became a haven for those looking for lower temperatures, spectacular landscapes and a warm local welcome.

One of the favorite vacation spots of U.S. President William H. Taft, who owned a summer home in the area, the region was recently the site of the G7 Summit in 2018, hosting leaders from around the world. But you don’t have to run a country to feel like royalty here; visitors from all walks of life are welcome to enjoy the laid-back charms of the region’s picturesque villages, as well as the majesty of the rugged countryside, which was formed by a meteorite that crashed into the area more than 350 million years ago.

To truly get a sense of the region, it helps to get a bird’s-eye view. Héli-Charlevoix offers helicopter tours of the area, and it’s awe-inspiring to see the landscape from this perspective. Hovering between Mont des Morios and the St. Lawrence River, you can see the crater that the meteorite left, and the small villages and pastoral farm fields nestled within. The views are so magnificent that for a moment I actually forgot my fear of heights and of being in small machines miles above jagged rocks—it also helped that our pilot had been providing these tours for years, despite his initial claim that this was his first time in a helicopter, too.

view of the region from a Héli-Charlevoix ride

For a closer view of the region, the Train de Charlevoix offers the chance to stop at seven different stations between Quebec City and La Malbaie along its 77-mile route. Open from June to October, the two-car train with its large picture windows provides a perfect platform from which to admire the rocky shores of the St. Lawrence, and to see areas otherwise not accessible by car. You can choose to ride straight through, or to overnight in different towns and rejoin the train when you’re ready to continue your travels.

The area is unique in that while it has attracted visitors for more than a century, it remains unspoiled and serene—you actually feel refreshed while wandering along the well-kept streets and wooded trails instead of rushed among milling crowds. That’s not to say that you can’t stay busy; there are miles of hiking, biking and motorcycle trails, charming shops and sublime farm-to-table restaurants, whale-watching tours and even North America’s second oldest golf course—the Club de Golf de Murray Bay. One of President Taft’s favorite spots, it still welcomes those who want to play 18 holes; those who do hit the links are rewarded by stunning views of the St. Lawrence River from its rolling greens.

There is a wide range of accommodations to suit every taste, from locally owned bed-and-breakfasts like Auberge des 3 Canards, which also has a charming on-site restaurant, to the Fairmont Le Manoir Richelieu, a castle-like resort perched on the cliff of Pointe-au-Pic that offers non-stop views and superior customer service. Though different experiences, they both offer top-of-the-line hospitality and delicious farm-to-table dining opportunities that showcase the riches of the countryside.

While modern conveniences may have made it easier to spend summers in less temperate climates, why would you really want to? A visit to the Charlevoix region is not only a welcome relief from the heat, but a return to a more relaxing, soul-enriching way of life. 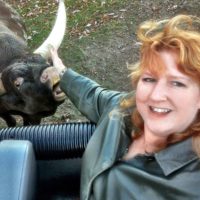 About the Author Vanessa Orr

Freelance writer. Road tripper. Travel diva. Dog rescuer. Writes for food or kibbles and bits. Based out of Pittsburgh, PA, via Juneau, AK, Vanessa has been a freelance writer for more than 25 years, and has been published in many diverse publications including the Pittsburgh Post-Gazette, Recreation News, CATS, VFW magazine, the Antique Trader and more. An avid traveler, she always brings home amazing memories...and often more dogs. Follow Vanessa on her blog, Mood Swings and Other Things, on Twitter, Facebook, Pinterest, or Instagram or visit VanessaOrrInk.com.
Website Pinterest