In the Davids of Donatello and Michelangelo lie the stories of the public and the private Florence. This was true in the 16th century, and it is still true more than 500 years later.

A Tale of Two Davids: Drawings of the statues of David from Michelangelo (right) and Donatello (left). Photo by Ann Fisher.

In the Davids of Donatello and Michelangelo lie the stories of the public and the private Florence. This was true in the 16th century, and it is still true more than 500 years later.

At nearly 17 feet tall, the David is more than the height of three men — truly, a colossus.

David resides in the long viewing hall of the Galleria dell’Accademia, a space designed to show him at his best. Supplicants enter to see him, god-like, at the far end. He stands above the throngs, aloof, and people approach quietly, awestruck.

Stern and focused, David is a man in the full glory of all that it means to be a man. His task is ahead. Goliath waits, menacing. David is calm, assured.

Donatello’s bronze statue of David, ca. 1430 – 1440, at the National Museum of the Bagello Photo by Ann Fisher.

Michelangelo’s David is the indisputable “Rockstar of the Renaissance.” Every year, more than 1 million people enter the Accademia to see him, to pay homage. How much direct revenue does this celebrity generate? In 2010, when Florence and the national Italian government were fighting over ownership of the statue, CBS News reported that the David generated an annual ticket revenue of over 10 million dollars — and that doesn’t touch the money spent on hotel stays, meals at restaurants, and tacky plastic David figurines.

Books on Michelangelo in numerous languages. Photo by Ann Fisher.

Apron with David’s image, sold by vendors around Florence. Photo by Ann Fisher.

If you had any doubt that Michelangelo’s David has rockstar status, you have only to observe the fans who go visit him, and the David products for sale EVERYWHERE. From the scholarly, to the kitschy, to the tasteless, there is something for everyone to get their David on!

Not far from the Accademia, Donatello’s David lives in the National Museum of the Bargello. Built in 1255, the Bargello has functioned as the palace of the mayor, the head of police, and a prison, before being turned into a museum in the mid-19th century.

Donato di Niccolò di Betto Bardi (c. 1385 – 1466), known as Donatello, was the son of a wool stretcher. His father, Niccolo, was a member of the wool guild in Florence. By the time of his death in 1466, Donatello was accepted as the undisputed patron saint of Florentine sculpture.

While there are no detailed records of Donatello’s early life, we do know that he travelled to Rome with Brunelleschi in 1402 – 1403, where the two sketched Roman sculpture and buildings, and Brunelleschi took measurements of the Pantheon, later critical to his design of the dome for the cathedral of Florence. Donatello also worked in Lorenzo Ghiberti’s bottega on the north doors of Baptistery in Florence.

I remember the first time I saw Donatello’s bronze David on a slide in an undergraduate art history course.

My reaction was — really?! That’s not David!

I couldn’t accept him; he was too pretty — very difficult to square with my view so dominated by Michelangelo’s work. At first glance, Donatello’s figure seemed weak to me, and effeminate by comparison.

Now, more than thirty years later, I perceive things differently. Donatello portrays a youth, the child on the edge of manhood — the improbable victor of a grossly mismatched fight.

When I see Donatello’s David today, I see my own child, my daughter, in her adolescent years, and cringe to think of a near-child tasked with killing a hulking soldier. This David stands, his foot resting lightly on the severed head, the deed done. He is calm. There is an inward turning in the feeling of this sculpture, the boy caught in a private moment of contemplation.

Cosimo de Medici built the Medici palace between 1445 and the mid-1450’s. Current scholarship suggests that Donatello created both the bronze David and his Judith and Holofernes as part of a joint Medici commission to decorate the new palazzo.

It is documented that Judith and Holofernes stood in the Medici Palace garden, while the David stood in the adjoining courtyard (where you see the Christmas tree in the photograph) for nearly thirty years — until the Medici were expelled from Florence in 1495.

This David was the first freestanding bronze nude created since antiquity, and Donatello’s work marks a massive leap forward in thought and achievement for the early Renaissance.

The two bronze statues are human in size, comfortably in scale with the private, if grand, home for which they were created. The family’s bedrooms were arranged around this courtyard, looking down on Donatello’s David, and the space would also have been accessible to all visitors of the Medici.

The Signoria (ruling body of the city) adopted Donatello’s earlier marble David as a symbol of the Florentine Republic. The Medici display of Donatello’s bronze David in their family home creates a conscious connection between themselves and the symbol of the state. The inscription once attached to the David reads, “The victor is whoever defends the fatherland. God crushes the wrath of an enormous foe. Behold! A boy overcame a great tyrant. Conquer, o citizens!”

Michelangelo was intimately connected to Donatello’s bronze David as well, since he also lived with the statue during his formative years.

Lorenzo di Medici brought the teenage Michelangelo to live in the Medici home to learn the art of sculpture from the elderly Bertoldo di Giovanni, an artist who in his youth had been a student of Donatello’s. Lorenzo treated Michelangelo as a family member for the two years (1490-1492) he was with the Medici. Michelangelo was encouraged to participate in the Neoplatonic Florentine Academy, a Medici sponsored discussion group of the most advanced scholars and thinkers in the city. This two year period under Lorenzo’s guidance and patronage would influence Michelangelo for the rest of his life.

David at the Piazza della Signoria. Photo by Ann Fisher.

In 1501, after five years in Rome, and fresh from his resounding success with the Pieta, Michelangelo returned to Florence. He was twenty-six. He had won the prize — the commission to carve the Giant, which was a massive block of marble over 18 feet tall and weighing several tons. The block had lain for more than 35 years in the yard next to the Duomo.

In 1464, the Wool Guild had commissioned a colossal David from Agostino di Duccio to adorn the cathedral, Santa Maria del Fiore. Duccio traveled to Carrara to select the stone. Quarrying and transporting this massive block of marble was a feat in itself, as it weighed something in the neighborhood of 25,000 pounds. Nothing this size had been quarried since ancient times. Transporting the Giant from Carrara to Florence, a journey of 80 miles, took two years.

When it finally arrived, leaders of the Wool Guild, the cathedral, and the government went to view their investment and were not pleased. It was a poor piece of marble; Duccio had chosen poorly in Carrara. The block was badly flawed, and to add insult to injury, Duccio had roughed out his concept to help lighten the slab, making the piece awkwardly narrow. It was difficult to see how anyone could carve a human from what remained. Duccio lost the commission, and the block lay abandoned next to the Duomo, known to all of Florence as “the Giant.”

In 1501, as Michelangelo prepared to begin work, all of Florence gathered to see the tremendous block hauled into an upright position. To protect his privacy, Michelangelo constructed a shed that completely hid his workspace from the public.

When the David was completed, and the city leaders removed the shed to show the citizens of Florence, it was love at first sight. The statue was originally destined to sit up high on the cathedral, but it was immediately apparent to everyone that the city would have to select a more appropriate site.

The Signoria formed a commission of citizens and artists, one of whom was Leonardo di Vinci, to decide where this masterpiece should be displayed. After much discussion, the group chose to place the David just outside of the door of the Palazzo della Signoria, home of the city government, and there it remained until 1873 when it was moved into the Galleria della Academia. A full-size copy stands in its place in the piazza.

Two Davids, side by side. Photos by Ann Fisher.

And so it is that these two Davids continue to speak volumes to us of an extraordinary time in history — the explosion of ideas and talent that defined the Italian Renaissance.

They are as different as two works of art on the same subject could be: in scale, interpretation, material, and time period — early Renaissance versus high Renaissance. And even more so — the two Davids embody the profound differences between a private commission designed for a home — for the Medici and their select group of friends and business associates, and a public work — communal in every way possible.

I do not advocate for one David over the other; I love each dearly.

Michelangelo’s Giant continues to take my breath away, regardless of how many times I see him. I pay court to this masterpiece each time I visit Florence. And I then visit the Donatello’s bronze. It is a different kind of visit, more a trip to see a friend, this sweet and beautiful boy — who lives quietly in the Bargello.

‘Either the spirit of Donato worked in Buonarroti, or that of Buonarroti first acted in Donato.’  — Giorgio Vasari, in Lives of the Artists, in reference to the talent of both Donatello and Michelangelo Buonarroti

Next post Cumberland Island and the Strange Deaths of its Developers 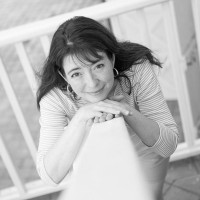 About the Author Ann Fisher

Ann is a sixth-generation Texan, named for a multi-great grandmother who arrived in Texas in 1836 just weeks before the battle at the Alamo. She grew up in Mississippi and New Orleans, has lived in both Seattle and Manhattan, and finally moved back to Texas in 1992. Her career has been in higher education, where she worked for over twenty-five years in many capacities, including teaching courses in writing and web-related topics, and managing academic departments. She is now writing and traveling full time. Her life and travel blog, AnnCavittFisher.com, hits its second anniversary in October 2017. She shares her travels, thoughts on life, and experiences as a woman and a mom.
Website Twitter Facebook Instagram