On my first trip to Europe many years ago, my sister Patty and I traveled around Ireland, England, Scotland, France and Switzerland via our Eurail Passes.  I found standing in front of the big departure boards in the train stations thrilling.

On my first trip to Europe many years ago, my sister Patty and I traveled around Ireland, England, Scotland, France and Switzerland via our Eurail Passes.  I found standing in front of the big departure boards in the train stations thrilling.  Something captivated me about those clicking sounds, and then new trains to magical places would appear with track and departure time. Knowing that I could board any one of those trains was a huge temptation.  I still love that clicking sound.  To me it sounds like adventure.

I have loved trains since I was a child.  They have always represented romance, mystery and excitement to me, and I sought out songs, movies and books that featured rail travel. Somehow the magic of romantic reunions and sad departures have always gotten to me, such as the last scene from the movie Summertime, when a tearful Katherine Hepburn was on board a train leaving Venice and Rossano Brazzi was running along the quay waving a beautiful white gardenia after her. Then there is the scene in Casablanca, where Humphrey Bogart is supposed to meet Ingrid Bergman at the Gare de Lyon. They were fleeing the Nazis, bound for Morocco. A colleague gives him a note in which Ingrid says that due to unforeseen circumstances, she cannot meet him after all. A very dejected Humphrey boards the train without her. In another film classic, Some Like It Hot, a bouncy Marilyn Monroe joins the other members of an all-girl band for a slumber party on the sleeper train. This entourage includes Jack Lemon and Tony Curtis masquerading as women. And of course, we can’t forget Agatha Christie’s fabulous Murder on the Orient Express. My list goes on and on…

Over the years, before the high-speed trains, I found it convenient to take sleeper trains between cities: Paris to Marseille, Nice to Venice, Vienna back to Paris (via a train called the Rosen Cavalier).  I loved waking up at border crossings, listening to the sounds of the guards talking, now in French and then in Italian or German. It is no surprise that for my latest excursion I found the idea of riding the rails between France, Switzerland and Austria enticing, and I planned to try out Rail Europe’s newest two-country rail passes, France-Switzerland and Switzerland-Austria. My itinerary, which I planned in advance, took me from Dijon, France, to Montreux, then from Lucerne, Switzerland, to Salzburg and Vienna, Austria.

My first train of the trip was a shiny TGV that zoomed from the Gare de Lyon in Paris down to Dijon in just 1 1/2 hours. In Dijon I took the Owl’s Walking Tour around the old city. I was amused by a small owl icon sculpted into the corner of a building near Notre Dame; its image almost completely rubbed smooth by the many hands that had touched it. Legend has it that the owl is a good luck charm for those who rub it with their left hand, the hand close to the heart, and make a wish. Following the instructions, I gave the little owl a rub and made my wish.

The trip from Dijon to Montreux, Switzerland, with a change of trains in Lausanne, took just over five hours. The tracks wound through green pastures dotted with herds of honey-colored cows and meadows covered with wild flowers, then maneuvered through the snow-covered Alpine pass.

Montreux is home of the fabulous international jazz festival and is situated right on Lake Geneva. A promenade follows the lakeside connecting a string of small towns and it’s ideal for walking or biking. Bike rental shops are readily available near the train station. This region is sometimes referred to as the Swiss Riviera and the scenery is dazzling. The distance between the towns is short, usually around a mile or so and the entire trail from Vevey-Montreux to Lutry is only 20 miles.

The train arrived in Lucerne right in the middle of a torrential rainstorm. It was brutal, but I hunkered down and tramped across the bridge from the station to the sumptuous Schweizerhof Hotel, which is one of the best in the city. As I approached the elegant reception area I looked more like a drowned rat instead of a sophisticated international traveler. The staff was understanding and gracious as I stood dripping helplessly at the front desk.

Lucerne and the surrounding area are perfect for walking. It’s also possible to do more adventurous trips, like taking the cogwheel train to the top of nearby Mt. Pilatus. I chose to follow in the footsteps of the legendary local hero, William Tell and visited his birthplace in Brunnen, and a small museum filled with memorabilia of old bows and arrows.

Next, I boarded a line that travels through the Alps separating Switzerland and Austria.  The best part of train travel is looking out the window at the passing scenery. Instead of flying high overhead, one can actually see the individual trees and sometimes spot wild animals in the woods. The train chugged up and over mountain passes, giving me ample opportunity to enjoy the fact that I was safe and warm inside the luxurious coach and not tramping through the snowy landscape just outside the windows.  I ate lunch onboard, entertained by a waiter who flirted and flittered around making sure my food was just right and that I had everything I wanted. He served the dessert with a flourish and I devoured the luscious, lighter-than-air lemon and whipped cream cake.

Salzburg has always been one of my favorite cities. I can’t explain why. Maybe it’s because it seems like a fairytale place, with folks wearing those traditional Tracht outfits. I’ve often imagined living there, wearing a complete dirndl costume and carrying a large basket as I went about my shopping; this fantasy probably explains why a few Austrian garments have found their way into my suitcases over the years, including two Tyrolean hats decorated with huge feathers. On this trip I enjoyed a special Mozart dinner concert at St. Peter’s Restaurant located in an old abbey.

The next city on my journey, Vienna, was to be the final rail connection. The scenery had changed completely from the craggy, snow-covered Alps to a countryside in full bloom with wild flowers and green with grain. I had chosen my hotel carefully and once again it was located right on the pedestrian-only streets in the old part of town. I hurried out for an afternoon walk and headed immediately for the Hotel Sacher for tea and—you guessed it—a slice of heavenly Sacher Torte. As the rich, dense chocolate slid down my throat I smiled and breathed a deep sigh. Ah, Vienna, city of my dreams.

That night I dined at Do & Co Albertina, the new hotter than hot local favorite. My dinner included an incredibly tasty sautéed goose liver followed by a deliciously crunchy Wiener Schnitzel. This is one of my favorite dishes and I savored every bite.

The next morning, I toured the old city on foot, and while at the Hofburg Palace, I caught a few minutes of a Lipizzaner horse practice session. I love those magnificent white horses and thrilled to the sight of their high-step dancing. Later on I found a little café down an alleyway in the pedestrian section of the city, simply named Solé. I dined on huge pale white asparagus with a tangy lemon/cream sauce, accented with thin slices of Prosciutto. I felt like I was in heaven. Surely white asparagus must be the food of the goddesses.

The last city on my journey was Paris. Yes, I saved the very best for last. I arrived late in the day and hurriedly showered and changed, then ran down to the hotel restaurant for dinner. The Hotel du Louvre is located right smack dab in the middle of the Louvre Museum complex and my room looked out onto the courtyard of the Comédie Française. It had been a long trip and I was a bit tired as I sat sipping a tall cool glass of champagne out on the terrace of the restaurant. The food was exquisite, and I indulged myself with a starter of marrowbones. I know many of you are saying “yuck!” right now, but this is a dish I love and seldom ever get the chance to eat. The marrow was divinely slippery and smooth.

Much later, I strolled down to the Seine River. The Eiffel Tower was doing her nightly on-the-hour twinkling light show, and the air was perfumed with flowering chestnut trees. Tears came to my eyes as I looked around. “Ah Paris, how could any city be more beautiful than you?”

Somewhere in the distance I thought I heard the whistle of a train and wondered if it was the Orient Express hurrying through the night towards morning and Venice. I could almost hear the clicking of the departures board announcing its alluring exodus.

Previous post Cumberland Island and the Strange Deaths of its Developers 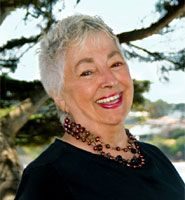 About the Author Jacqueline Harmon Butler

Jacqueline Harmon Butler, recipient of many press awards for her writing, including Italy’s prestigious "Golden Linchetto Prize” for best foreign journalist and the Lowell Thomas Gold Award for internet publications. In a variety of international publications and anthologies, her travel writing has tempted readers’ palates with mouth-watering meals. Her books include The 7th Edition of the Travel Writer’s Handbook. Her published memoir, Taking a Chance on Love, chronicles her 20-year romance with a much younger Italian man. Her book, "One Last Trip to Paris" is about a 50-year-old woman who moves to Paris, France, to begin living the life she never had.
Website

Kokopelli Cave Experience: The Anasazi Never Had It So Good!