Each February the city of Menton, on the French Riviera, rejoices with festivities that can baffle even the most consummate of travelers as well as its own inhabitants.

Revellers young and old enjoy the parade amidst confetti and serpentine, while a gorgeous leopard inspired by the eponymous Visconti film passes by. Photo by Daniele Auvray

There is a sweet smell in the air, pervaded by blossoming mimosa and orange trees in the hillsides, right above the Bioves garden.

It is the death of winter, soon to be followed by the glory of nature’s rebirth giving the locals plenty of reasons to celebrate.

And celebrate they do.

Each February the city of Menton, on the French Riviera, rejoices with festivities that can baffle even the most consummate of travelers as well as its own inhabitants.

For nearly three weeks, the town is perfumed with hundreds of tons of citrus, displayed on floats paraded through the streets as well as at the jardins Bioves (Bioves garden). Nearly a quarter million of visitors fill the city, already a magnet for winter escapees who come to enjoy the nearly 300 days of sunshine each year.

Derived from a scene in Fellini’s Casanova, this citrus sculpture features the Venus goddess emerging from the water during Carnevale in Venice. Photo by Daniele Auvray

Dubbed the Dream Factory, Cinecitta was where simple ideas could be turned into reality. Shown here is Fellini’s E La Nave Va in the Bioves Garden. Photo by Daniele Auvray

In Bioves Garden, this scene, reproduced from Dino Risi’s film Poor but Beautiful, even includes a real car. Photo by Daniele Auvray

As night comes, viewers are mesmerized by glowing citrus sculptures such as this scene from Fellini’s La Dolce Vita, reproduced in the Bioves Garden. Photo by Daniele Auvray

Gondola structure made with citrus by the Church of San Giorgio Maggiore – a copy of the Bioves Garden scene in Visconti’s Death in Venice. Photo by Daniele Auvray

By the late 19th century, the Russian aristocracy and wealthy English tourists flocked to what was then a health resort. Palaces and elaborate villas soon followed, many becoming the sites of spectacular gardens, as English botanists took advantage of the sub-tropical micro climate and introduced rare tropical plant species that still flourish in the city’s numerous gardens.

As for the lemons, which have grown in the area for at least 300 years, no one is sure where they came from, but some believe that they hopped directly across the Mediterranean to Menton from Egypt.

Years ago, 100,000 lemon trees grew in the region, but disease and frost killed off many groves. Today, there are about 3,000 trees in Menton. A simple visit to the local fruit market and you’ll most certainly hear the proud fruit vendor proclaim to the rather incredulous passer-by that: “It is the only lemon that you can eat like an apple!”

The Fête du citron (Lemon festival) started casually at the turn of the 20th century as a mere form of entertainment for the gentry during the winter but has evolved into a full-blown spectacle.

Originally part of Italy, Menton became the property of Charles Grimaldi, Lord of Monaco in 1346. In 1848, it broke away from Monaco, becoming a free city, and in 1860 became part of France.

Intertwined as it is with bordering Italy and Monaco’s history, Menton still retains much of its earlier atmosphere, both in its colorful buildings façades, narrow lanes and streets in the old part of town.

Elaborate Venice Carnevale costume and mask, right out of Fellini’s Casanova, at the day parade in Menton. Photo by Daniele Auvray

The 83rd Lemon Festival took Italian cinema of the 50’s and 70’s as its theme. The Bioves Garden was dressed up for the part to reproduce several scenes from movies made entirely of citrus. At its entrance was a citrus sculpture of the head of Venus inspired by the opening scene of Fellini’s film “Casanova.” There was also a rendition of Rome’s iconic Trevi Fountain and scenes from many other popular Italian films.

Enchanting by day these huge structures are mesmerizingly beautiful when night comes and the parades begin. As the colorful crowds moves through the narrow streets they finally come together along the seafront on Promenade du Soleil, to be entertained by brass bands, acrobats, folk groups, costumed entertainers who wheel, spin and dance between the magnificent citrus fruit floats.

Here comes a huge Venetian mask, re-enacting once more Visconti’s masterpieces: “Death in Venice”, but also: “Il Gattopardo” (The Leopard), as a gigantic citrus sculpture in the shape of a leopard passes in front of the bemused and elated spectators.

Next post Norwich, England: The Historic and the Hip 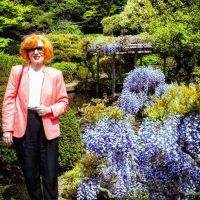