“I find that in contemplating the natural world my pleasure is greater if there are not too many others contemplating it with me, at the same time.” – Edward Abbey

This Land was Made For You and Me… And Them

The National Parks Service (NPS) kicked off its centennial celebration on the heels of a record-breaking year in which more than 300 million people visited the parks. It is likely that many NPS sites will see another surge in visitation in 2016 as a result of the additional media attention surrounding the anniversary.

So parks are more crowded now than ever. Our social media feeds can make it seem like all of our country’s natural marvels have already been discovered, plundered with selfies, and reconstituted with Instagram filters.

However, even the most popular parks continue to offer many ways to commune with nature on trails less traveled.

In a recent press release, National Park Service Director Jonathan B. Jarvis gave encouragement to those who want to avoid hordes of people Facebook Live broadcasting or catching Pokémon on their phones.

“Even with record breaking visitation, visitors can still find quiet places in the parks for those willing to seek them out,” says Jarvis. “I can take you to Yosemite Valley on the Fourth of July and within five minutes get you to a place where you are all alone.”

A TALE OF TWO CANYONS

The Grand Canyon National Park, perhaps the most famous NPS park and second in popularity only to the Great Smoky Mountains National Park, has had year-over-year visitation increases since 2011. As of last September, it had already welcomed more than 4.8 million visitors since January, translating to the second-highest number of annual visitors on record, even without taking into account the last quarter. Once tabulated, the October through December numbers are likely to push the park past the all-time 5.5 million visitor record set last year.

However, ninety percent of all that Grand Canyon traffic is on the South Rim, leaving the North Rim virtually untouched by group tours, motor coaches, and device-obsessed crowds.

Part of the difference in visitation patterns is due to the fact that the North Rim closes for the winter from October 15th through May 14th, but even on months when both rims are open, the north gets far less visitors; accessibility is a big part of the reason why.

The South Rim is easily accessible from interstates and urban centers with heavily developed tourism infrastructures, whereas the North Rim is located in what is known as the Arizona Strip; a sparsely populated region (6,000 inhabitants) with limited road access and geological barriers, the most obvious being the Grand Canyon itself.

Furthermore, the South Rim is what people know through pop culture. From the Griswalds to the Simpsons, famous families have long been taking trips to the South Rim and impressing images of those plunging, panoramic vistas into the American psyche. So it is no wonder that to most visitors a trip to the Grand Canyon is synonymous with peering over the edge of the South Rim along with thousands of other tourists.

If the two sides of the canyon were twins, the North Rim would be the cool underground artist with a loyal cult following… The South Rim would be Beyoncé.

WHY THE NORTH RIM?

Not all views are created equally.

At the North Rim, you do not just stare at the Grand Canyon, you become a part of it.

The outlooks here are not necessarily in front of you; they tend to surround and envelop the visitor in a wonderful sweep of bluffs, ponderosa pines, and precipitous chasms. It is also more than one thousand feet higher and 10°F cooler here than in the South Rim, so it very literally has a different feel.

Emily Davis, the Public Information Officer for the Grand Canyon National Park, says, “People usually first experience the Grand Canyon at the South Rim, and the ones who feel like they might be missing out on something, tend to come back and visit the North Rim for a more solitary experience. The two sides are very different.”

Even animals look and act differently here. The Kaibab Squirrel, a rare subspecies of the Abert’s Squirrel found only on the North Rim, has adapted to the environment by evolving unique coloration patterns and habits that distinguish it from its relatives on the other side of the canyon. Its symbiotic relationship with fungi and ponderosa pines make it a crucial player in the North Rim’s ecosystem.

Condors, mule deer, bison and bighorn sheep are some of the other animals that can be spotted along the many hiking trails.

Angels Window, a natural arch, is one of the natural attractions fount on the interpretive Cape Royal Trail. From the top of the arch, the Grand Canyon Desert View Watchtower can be seen ten miles away, on the other side of the canyon. Through the window, the now green waters of the Colorado River are visible.

Horseshoe Bend, located within the Glen Canyon National Recreation Area, is accessible via a 1.25 mile roundtrip hike from the trailhead parking lot.

The Kaibab Squirrel is a subspecies of Abert’s Squirrel and can only be found in the North Rim. It has a symbiotic relationship with the fungi and ponderosa pines of the region. As it feeds on the fungi and pines, it disperses it pores, which help the pines access nutrients from the soil.

LODGING AT THE NORTH RIM

Although tourism complexes have been constructed on both sides of the canyon, lodging is more limited on the North Rim.

Camping spots fill up early and backcountry permits are required for camping within the canyon. For visitors seeking a bit more comfort, Kaibab Lodge and Jacob Lake Inn offer accommodations near the North Rim entrance, the latter is famous for its cookies.

For the ultimate North Rim lodging experience, though, you cannot beat a stay in the historic Grand Canyon Lodge, which is the only complete surviving lodge and cabin complex in the national parks.

Originally built in 1928 by the architect Gilbert Stanley Underwood, the majestic landmark burned down four years later and was rebuilt in 1936 on the original footprint. It incorporates natural materials native to the region, including Kaibab limestone and ponderosa pine timber, resulting in an aesthetic profile that appears to organically grow out of the rocky precipice on which it is located. (While inside, remember to rub the nose of the famous Brighty the Burro statue in the lobby for good luck; you’ll notice from the sheen on the nose that you are not the first to do so.)

The restaurant offers regional and 1930s themed food and has been certified as a green restaurant since 2009.

Complimentary shuttles to the Kaibab trailhead are available twice daily, and one-hour and half-day mule rides can be arranged at the Trail Rides Desk from 7:00 a.m. to 5.00 p.m., daily.

Currently, the Grand Canyon Lodge is accepting reservations for the 2017 season, which are in short supply and high demand (www.foreverresorts.com/grand-canyon-lodge, 928-645-6865).

Glen Canyon Dam – The second largest dam in the US, only 16 feet shorter than Hoover Dam, is the reason why the Colorado River is no longer “colorado” (red), the dam filters out the natural, red sediment in the water. Projects are underway to allow the dam to more naturally mimic its ancient flow.

Navajo Bridge – The original historic steel arch bridge was constructed in 1929 and 66 years later was replaced by a more modern bridge that accommodates larger vehicles. The Navajo Bridge Interpretive Center anchors the two bridges on the west side of the canyon.

Balancing Rocks – These balancing rock formations can be found on the way from Navajo Bridge to Lee’s Ferry, where the Colorado River and the Paria River join and river rafting excursions begin

Approximately 100 miles northeast of the North Rim entrance is Glen Canyon National Recreation Area, which is roughly the same size as the Grand Canyon National Park and carved by the same river, but gets less than half of the visitors as its famous neighbor.

It is definitely worth a visit.

“There are several ways to get away from the crowds, and distance is just one way,” says Christiana Admiral, the Chief of Interpretation at Glen Canyon National Recreation Area. “Experiencing the parks at night during off-peak hours is another way visitors can have a more intimate experience. This year we started several dark sky programs, including a two-day festival in October and we have received funding to repeat the program in 2017.”

There are many amazing sites at the recreation area, including Navajo Bridge, Horseshoe Bend, Glen Canyon Dam, Lake Powel, hanging gardens, Rainbow Bridge National Monument (purportedly the highest natural bridge in the world), and many other natural wonders you can contemplate alone… or with company.

Next post An Epic Journey to Inspire the Spirit 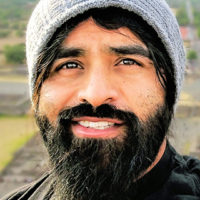 About the Author Efrain Villa

Efraín is a photographer, actor, writer and global wanderer whose endless quest for randomness has taken him to more than 50 countries in five continents. His writing has appeared on NPR’s Weekend Edition, the Good Men Project, TravelWorld International Magazine, Zymurgy, as well as Spanish language publications. While not running his consulting firm in Albuquerque, he is busy devouring exotic foods in faraway countries and avoiding adulthood while wearing the least amount of clothes possible. His travel stories dealing with the messiness, humor and beauty of cultural collisions can be found on his website: www.AimlessVagabond.com
Website Twitter Facebook