A pink glow in the eastern sky signaled the start of another picture-postcard day in the seaside town of Puerto Vallarta. The bow of our catamaran slid slowly through the calm Maritime Terminal waters, creating a gentle wake that rocked the other boats.

The waters around the islands support a dazzling array of marine life such as 25-foot manta rays, marlin, eels, octopus and even sea horses. The rocky outcroppings are among Mexico’s best bird watching sites, with nesting colonies of 94 aquatic and sub-aquatic bird species including the rare white-capped marine swallow and the blue-footed booby (found only here and the Galapagos Islands).

A loud cacophony of birdcalls greeted us as we tied up to the mooring about 100 yards offshore and donned our dive gear. The snorkelers were already splashing around when we slipped into the water amid a cloud of blue and yellow king angelfish looking for a handout. We dropped down to the bottom and swam out towards the large rock guarding the entrance to the small cove.

Thirty feet above, the sun sparkled at the surface like a giant disco ball. Streams of sunbeams pierced the azure water, illuminating the coral reef. I was trying to photograph a shy pufferfish that was hiding in the Elkhorn coral when my dive buddy nearly tugged my arm off. I spun around to see him frantically gesturing and pointing upwards. About 15 feet overhead, a giant manta ray was performing an underwater ballet of loops and rolls, its enormous wings propelling it effortlessly through the water. The snorkelers were watching the performance from the surface.

The composition of manta with the snorkelers above on the surface had my heart pounding as I raised my camera. Then it hit me—such a great composition, and my camera was set up for macro, not wide-angle. All I could do was swallow my disappointment and watch the magnificent creature until it disappeared into the blue abyss. Luckily, I did manage to get some manta shots before leaving PV.

Scuba diving is only one of the great adventures Puerto Vallarta has to offer. Nestled along the coastal hills of Bahía de Banderas (Bay of Flags), one of the largest protected bodies of water on the West Coast of the Americas, Puerto Vallarta combines the charm of old Mexico with a host of modern amenities. Its stunning Pacific coastline, lush rainforests, dramatic mountains, friendly people and bucolic countryside make it an ideal and affordable alternative to Mexico’s other hot spots. Whether you’re a Gen-X adrenaline junkie, or a stop-and-smell-the-roses rambler, you’ll find plenty of activities to keep you busy in the town the locals call PV.

PV’s humble beginning dates back to 1524, when Francisco Cortez de San Buenaventura first explored this section of the Mexican coast. His voyage almost ended in disaster when several thousand fierce Xalisco warriors armed with bows and bright-colored feathered banners confronted his small group as they stepped ashore. The tense standoff lasted all day, but both sides eventually retreated peacefully. The sight of all those feathered banners prompted the Spaniard to name the great bay the Bay of Flags.

Except for a few seasonal whalers, the bay remained largely unsettled for three centuries. Then in 1851, Don Guadalupe Sánchez Torres established Puerto de las Peñas, a small outpost on the banks of the Rio Cuale. The town was renamed, Puerto Vallarta, when the new governor of the State of Jalisco, Don Ignacio Luis Vallarta, took office in 1918.

PV’s peaceful, low-key vibe ended abruptly when Hollywood came to town in 1963. Director John Huston selected the village as the backdrop for his steamy epic Night of the Iguana starring Ava Gardner, Deborah Kerr and Richard Burton. That’s when a married Elizabeth Taylor bought a villa on the hills above the city to be closer to Burton during the filming. Their well-documented affair made the pages of every newspaper and gossip column in North America, providing a steady stream of free publicity for the small town.

Since then, PV has hosted the casts, crews and fans of more than two-dozen major films including Predator, Swashbuckler, Puerto Vallarta Squeeze, The Domino Principle, Kill Bill and Herbie Goes Bananas.

The first thing you’ll notice as you fly into PV are all the beaches. More than 40 magnificent strands of soft white sand fringe the bay’s 100-mile-long coastline––from secluded sandy ribbons like 100-yard-long Majahuitas, only accessible by boat, to five-mile-long Bucerias, a favorite with North American visitors. Of course, the most well-known beach is the sensuous half-mile-long arc of Mismaloya that Huston showcased in many of his 1963 scenes. The original movie set is now a restaurant at the far end of the beach.

Besides diving and snorkeling, water sport outfitters offer a variety of other marine diversions including parasailing, sea kayaking, wild dolphin swims and deep-sea fishing for sailfish and marlin.

The day after our manta encounter, we headed out to sea for some big game fishing with Mike’s Fishing Charters. Just north of the Marietas Islands, the crew put six lines in the water, and before we had time to finish our breakfast snack, one of the crew yelled, “Fish on!” We all dashed for rods, not knowing which one had the fish on. Turns out it was a triple-header.

Thirty minutes later, three 25-pound, tail-slapping dorado (mahi-mahi) churned the water at the stern of the boat. Sunlight sparkled off their bright yellow-and-blue bodies as the crew delicately removed the hooks from their mouths and released them. What a way to start a day of fishing.

An hour later, we hooked our first large sailfish and took turns in the chair reeling it in. The fish took about 300 yards of line with its first run before popping up to the surface to jump and tail walk. Forty minutes later, the 120-pound fish hit the deck. During our six-hour charter we landed three sailfish and a half-dozen dorado.

At dinner the previous night, we chatted about our upcoming fishing trip with the cheerful hotel chef, who graciously offered to cook anything we caught. We took one of the smaller fish back to our hotel and that night dined on mouthwatering grilled mahi-mahi in a red salsa sauce.

But it’s not only gringos and sailfish that flock to the great bay’s warmth. Each year, between December and March, about 350 Pacific humpback whales migrate 6000 miles from Alaskan waters to give birth and mate in the bay. You can see the whales from shore, but for a more personal encounter, take one of Vallarta Adventure’s combination whale watching and swim with wild dolphin tours.

Landlubbers will find a full range of land-based activities in and around PV. At El Eden you can see the old helicopter and the jungle waterfall where Arnold Schwarzenegger fought the alien in Predator. The park also offers rainforest hiking trails, canopy catwalks and a series of 13 zip lines that crisscross the Mismaloya River rainforest.

Other land activities include four-wheel-drive bird watching safaris deep into the mountains, sea turtle nesting tours (August to January) and rainforest hiking. Or you can join Vallarta Adventures on one of their cultural flightseeing tours to the remote pre-Hispanic mountain villages of San Andres Coamihata––home to the Huichol Indians––and San Sebastian, a rustic 17th-century mining town.

Also, within 30 minutes of downtown you’ll find seven championship courses designed by several golf legends. Nestled in the cool Sierra Madre foothills, the Vista Vallarta Golf Club boasts two championship courses designed by Jack Nicklaus and Tom Weiskopf. Each year the club hosts a number of world-class events including the PGA World Cup of Golf and the Taylor Made Invitational.

Unlike many other Mexican resort towns, PV did not develop with an emphasis on modern tourism. It didn’t even have a paved airstrip or access roads until 1968. Rather, tourism evolved around the town’s traditional old world charm. As a result, Puerto Vallarta’s seamless fusion of traditional and modern cultures, rich biodiversity, upscale amenities and numerous adventure possibilities ranks it as one of Mexico’s premier seaside resorts.

La Nostalgia sculpture on the Malecon

The Malecon walkway with palms & bouganvilla

Must See Must Do…

– The sand sculptures along the Malecon (seawall)

– Visit the stately Cathedral of Our Lady of Guadalupe

– The old local market at the south end of town

– Take a step into the past at the Huichol Museum

Next post Wanderlust: A Sensory Spa Journey in Puerto Vallarta 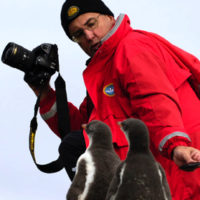 About the Author Michael DeFreitas

Michael DeFreitas has been a professional freelance travel writer and photographer for almost 35 years. Each year hundreds of his images and dozens of stories appear in many North American and International magazines including covers for Caribbean Travel & Life (Oct/04), Interval World (Fall/04), Canadian Traveller (June/04), Coast To Coast (March/04) and Geographical UK (March/04). His images and stories have won NATJA, TMAC and SATW awards.
Website