Move over skates and skis — winter adventures are gaining quick popularity thanks to cool new offerings in Canada’s National Parks.

Navigating the slick trails and winding pathways of Johnston Canyon in Banff National Park, sporting spiked crampons and toting ice picks, I looked fierce. I reveled in the canyon’s beauty all the way along until arriving at the Upper Falls, which would serve as my first foray into ice climbing destination.

Among the flow of frozen blue tinted ice, and just above the flowing waters of Johnston Creek, is where I would learn how to tie proper knots, set up harnessing gear, trust in the belaying efforts of my Yanmnuska Mountain Adventure guide, and try out newfound ice climbing techniques.

A bit tired from the 2.6 km hike, the surreal nature of climbing a frozen waterfall took over and adrenalin fueled me onward. I started on the easier side of the falls, more appropriate for beginners. After observing a demonstration of proper techniques, I stabbed my toes into the ice ensuring my footing, and swung my ice picks above, chipping away into the hard waterfall.

The actions came quite naturally and not surprisingly, reminded me of rock climbing. Completely safe with my guide belaying me from below, I scaled upward numerous times, each round navigating slick and bumpy areas. Gaining quick confidence I moved on over to a more difficult pitch of ice and astounded myself with just how comfortable I felt as a newbie climber.

Evolving from rock climbing and other mountaineering activities, ice climbing’s appeal and popularity has been steadily increasing over the past couple of years.

Tackling it sounds much more daunting then it really is. It’s almost worth keeping it a secret that most anyone can do it, if not only for momentary admiration. But the truth is, ice climbing is something beginners can do. And really, who wouldn’t want to say they climbed a waterfall?  It just takes a sense of adventure from those in relatively good shape who are willing to learn.

Destinations across Canada have been intentionally growing a diversity of winter offerings, including ice climbing. In particular, national parks have paved the way, maintaining park grounds and creating innovative experiences, along with developing attractive interpretive programming to draw in adventurer seekers.

Banff and Jasper National Parks, both in Alberta, are two of the country’s best places to give one of the new breeds of winter exploits a try. Getting outside and embracing the cold has never been more inclusive, accessible or fun.

After years of steadily tiptoeing into winter activities, starting with traditional ones like snowshoeing, skating, etc., and leading to more advanced outings such as dog sledding and winter camping, my thirst to capitalize on the snow and cold increased. As the time has gone I realized I’m far from alone.

Now it seems adventure travel during the cold season is in demand from everyday folks – those yearning to make the most of each and every month, opting to find ways to extend outdoor adventures, regardless of season.

During two trips this winter to Banff and Jasper, I had the opportunity to get knee deep in new sub zero experiences. Some tested my stamina, while others thrilled; and learning was part of each new lesson. From ice climbing and heli-snowshoeing to fat biking, star gazing and high-tech wildlife tracking; winter adventure was plentiful.

Both parks not only fulfill the growing appetite for outdoor winter adventure, but also offer some of Canada’s most breathtaking views. One perfect way to take in such views is from above.

Heli-snowshoeing was heli-cool, plain and simple, especially when you get to act as co-pilot. Touring with Rockies Heli Tours based just outside of Kananaskis, was one of those things that turned out to be just as thrilling and wondrous as you first imagine it. Lifting off, seeking out snowy white-capped mountaintops at around 100 mph, zipping and grazing over the beautiful Bow and Kananaskis Rivers, was nothing short of exhilarating.

Adding in snowshoeing atop a mountain though, made this mix a true adventure. Weaving through forest trails, crunching through hard snow atop Lusk Hill (aptly named after the creek below) was peaceful in contrast to the exciting ride up. My sense of awe increased when sensing where my mesh-y steel footwear was leading me.

At a vantage point on the mountains edge, we stopped to sip hot chocolate and take in a birds-eye view of the Rocky Mountain ranges including Fortress Mountain just across the way, and to the right Opal Range, opposite the Kananaskis Valley. Talk about really feeling on top of the world.

Another cool experience I was able to try, albeit at ground level, was fat biking, an activity also seeing a surge in popularity countrywide.

Jasper National Park is a national mecca for bike enthusiasts. Numerous trails, once thin wildlife pathways, have morphed into multi-use trail systems; well used amongst the active community of hikers, cross country skiers and riders. For those wanting to ride during the winter season, fat bikes prove to be an ideal solution.

With 4-5 inch tire widths inflated at ultra-low pressure and a seemingly complete lack of suspension, bouncing as you ride along is part its charm. The other main advantage includes the ability to navigate winter conditions of snow and ice (and in summer, the sand), comfortably.

Though there were scarce patches of white stuff due to an unusually warm March, I did get to give it a go on the ice. Throughout the 8 km ride, I thoroughly had fun and traversing trails with ease and a sense of lightness.

Our course took us from downtown through a loop of trails following the Old Lodge Road aside the Athabasca River, then up to near the Jasper Park Lodge where we edged around Lac Beauvert and the golf course before looping back. I was convinced by the trip’s end that I needed to add a fat bike to my at home fleet.

Guided hikes that offer interpretive programming by Parks Canada are also a great way to be active while exploring and learning.

After a short drive, I was ready to take in my first star gazing experience under the night sky at Pyramid Island in Jasper, the world’s second largest dark sky preserve.

Starting with what seemed to be counter intuitive instruction, our Interpreter instructed us to “Close your eyes and just listen.”

I was thinking ‘Shouldn’t we be looking up?’ I complied and took in the darkness, my eyes shut tight. Soon enough I heard the stirring sounds of the wind – much louder than it seemed than with my eyes open. Then there was the creaking. The icy waters of the island – shifting, melting, moaning and gurgling made me feel part of a very alive environment in the middle of nowhere.

After taking in the sounds of the night, I allowed my eyes adjust to the darkness.  Taking in the millions of stars above, I stared upward in wonder, astounded by their pristine clarity.

First we saw the whitish band of the Milky Way, and then learned how to identify planets and easily visible constellations such as Orion. Before leaving we also mimicked calls of several owls that call the forest home. The whole experience made me realize the nights also have superior offerings, especially for the senses.

My last outing would be a 2 km hike in Jasper’s Palisades, a concentrated pinch point for wildlife, to learn all about tracking using both traditional and high-tech methods.

The Palisades, a geological formation with sheer cliff face and vertical marks are found alongside the Yellowhead Highway (Highway 16). Today the area’s historic buildings still stand. Once a settlement for homesteaders, it has since had several incarnations including as a dude ranch, and an RCMP and warden training centre.

As our hike began, our interpreter led us over to a tree and said, “We don’t always see animals walking through the woods but we see signs of it.” We looked up to observe an obvious clue that a black bear had climbed and slipped down this very tree. Then we headed over to a branch where another bear’s fur dangled in the wind.

As we made our way to where a series of camera trap stations, placed strategically in front of well used rubbing poles (aka – animal message boards), I got a good sense of just how popular this pinch point is as a wildlife pathway.

Jasper National Park has 80 or so camera traps set up to catch animal images during the day and at night, using infrared technology. The traps are used to count, observe and better understand animal behavior. We learned how they work, and then tried our hands at setting and testing them.

Using an iPad in the middle of the woods, our interpreter showed us captured images of wolves, bears, elk, and even elusive wolverines; all taken via camera traps – all along this very thin wildlife trail. The fascinating morning ended with us learning other ways wildlife is counted, tracked and monitored in the park – using high-tech collars and telemetry methods.

Also try: Ice climb at the Edge of the World, 1700 meters above sea level on Marmot Basin. Go with Rockaboo tour company who also offer glacier travel courses and mountaineering.

*If you are in the area for October, don’t miss the Jasper Dark Sky Festival.

Eat at: Grizzly House – For those with an adventurous spirit or a deep love for fondue. Food choices range from local beef to exotic meats (think rattlesnake and shark)

Sleep at: Mountain Buffalo Lodge – Atop Tunnel Mountain, this luxury boutique hotel offers spacious rooms with large fireplaces and lovely claw foot tubs to soak in. Be sure to try dining in house as the fare is fresh, local and tasty.

Also try: Après climb, head over to Cedar & Sage and indulge in some après-wellness. Chill in their serene and chic lounge while sipping away on a freshly squeezed juice from their juice bar. 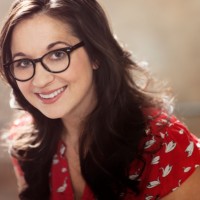 About the Author Jenn Smith Nelson

A multiple award winning freelance travel writer and photographer, Jenn also works as an editor, blogger and new media consultant. As comfortable online as she in with print publications, she contributes regularly to a number of outlets including the Toronto Star, Westworld, Chatelaine, the National Post, Parents Canada, Vacay.ca, Prairies North, Just for Canadian Doctors/Dentists, Pink magazine and more.
Website